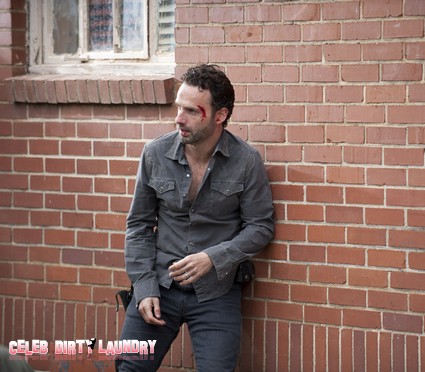 Did you watch The Walking Dead ’18 Miles Out’ tonight?  If you missed it, you can read the full official recap HERE. ! In our wrap-up we have some observations of last night’s show and some questions.

Do you think Rick and Shane should have headed 18 miles out? I thought it was pretty stupid, if they are going to dump Russell among Walkers, they should just mercy kill him themselves.

Didn’t you think Rick got his message across that he will do anything to keep his family and his unborn child safe? Although, I don’t think Shane likes getting his face rubbed in it all the time, do you?

I was happy that Rick agreed with Shane, that Otis’ death was to protect other people and it had to happen. What did you think about this? Do you think Otis should have died?

Lori is really getting under my skin, what about you? She gives men advice to Maggie, when she can’t control the one she has.

I thought Rick was smart to tell Shane that they have to start using their knives more, stop wasting bullets. At least he is trying to help, but I don’t agree with all his decisions, do you?

What did you think about Beth wanting to commit suicide? I can understand how she feels, their really isn’t anything to look forward to, but I was happy that in the end she decided not to do it. I thought Maggie overreacted with Andrea, after all, she was only trying to help.

I didn’t want to see Rick or Shane hurt, but I am happy they beat the crap out of each other, do you think this will finally have the two make a truce?

I almost thought Rick was going to leave Shane, didn’t you? I was shocked when Russell was behind the wheel of the car, I’m surprised that Rick trusted him, what about you?

I’m really looking forward to next week, Russell is tied up in the barn and it looks like he just may get shot, but not if Hershel has anything to do with it.