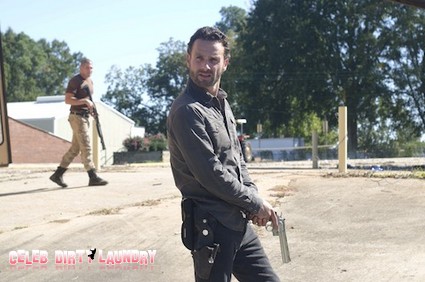 Tonight The Walking Dead returns with a whole new episode called ’18 Miles Out.’  Stay tuned as we live blog the show with all the up-to-the-minute results.   On last week’s episode Rick, Hershel and Glenn fought to survive against new foes, both dead and alive. Shane found Lori in danger on the road and made it his mission to bring her back to the farm.  Andrea stepped up to the plate and confronted Shane about his “presentation leaving something to be desired.”   If  you missed the last episode called ‘Triggerfinger’, you can read our official recap here!

On tonight’s epsidode Shane and Rick appear to be “18 Miles Out” at a sort of mission, perhaps back at the high school where Shane gave up Otis so that he could make it back to the farm, which ended up saving Carl’s life. I think we might just be seeing a zombie Otis coming to attack Rick and Shane, will this be the end of Shane?  The official synopsis for the show is – Rick and Shane come into conflict over the fate of an outsider.  Andrea helps Hershel’s youngest daughter face a crucial decision.

We will be live blogging the show with all the up-to-the-minute details at 9PM EST so make sure to come back to this spot and watch the show with us. Refresh often to get the most up-to-date results!  While you wait for the recap you can enjoy some spoilers and 2 sneak peek videos here of tonight’s show!

RECAP: Rick and Shane are headed 18 miles out when Rick stops the car to talk to Shane. Rick tells Shane that he hard what really happened at the school and wants to know if it was to survive. Shane tells him yes, Otis died so they could be saved. Rick tells him to save Carl’s life, he would have done anything as well. He goes on to tell him that he is not going to be dangerous like Lori thinks he is. He knows what happened between him and Lori and although he wanted to beat the crap out of him, he understands. Further, Rick will do anything to keep his family and his unborn child safe. He tells Shane that he doesn’t love Lori, he just thinks he does. Rick wants to move on, but Shane needs to accept this understanding first.

Shane explains to Rick that everything happened so fast and he couldn’t live with himself if Lori and Carl died, he didn’t look at her before that and if he could take it all back, he would.

They go open the trunk of the car, they have Russell inside and he is duck taped.

Meanwhile, Lori is with Maggie who tells her about her problems with Glenn, Lori’s advice is to tell him to “man up”.

Rick tells Shane they have to start using their knives more, stop wasting bullets. rick is hoping for a cold winter, to kill off some of the Walkers.

Lori is with Beth, she is finally up and asks Lori how could she have gotten pregnant. Lori tells her she doesn’t have a choice.

Rick is still driving, he has past the 18 miles because he claims that he wants to give Russell a fair shot. They stop at a public works building and both get out. There is a fenced yard, Rick wants to leave the boy there, but he sees a Walker. Shane wants to shoot the Walker and Rick stops him, he takes a knife and stabs him in the head. Another Walker comes out, it’s Shane’s turn to kill him. Rick breaks the lock on the fence and they go to look around.

Shane goes inside a bus to look around, while Rick is looking for supplies. They head back to the car and pull out Russell.

Rick and Shane dump Russell on the ground, he claims that he went to school with Maggie but she didn’t know he existed. He goes to tell them more about his life, trying to get them to pity them. Shane is afraid that Russell will try to go back to his people and lead them to the farm, he tries to shoot Russell and Rick stops him. Shane is upset, Rick wants to being Russell back to the farm and think about what to do. Shane tells Rick off, he says he doesn’t think Rick can keep Lori and Carol safe. The two get into a fight and Russell is on the ground, but tries to drag himself over to a knife that Rick threw at him.

Rick and Shane are wrestling over a gun, Russell got the knife and is trying to cut his hands free. Shane finds a huge wrench and throws it at Rick, it breaks a window and a Walker gets out. Rick kills it, but soon, tons of Walkers are coming at them.

At the farm, Maggie asks Beth if she is crazy, wanting to commit suicide. Beth tells her that her father was wrong, there was no cure. She goes on to tell her that they cannot avoid death and they should both commit suicide together. She doesn’t believe that anyone can protect them, they are alone against the Walkers and she doesn’t want to be gutted. She wants to commit suicide in her bed, beside Maggie.

Rick, Shane and Russell are fighting for their lives. Poor Russell still has he hands bound when one Walker tries to attack him. Just in time, he gets loose and kills the Walker.

Beth and Maggie are fighting, while Lori and Andrea are in the kitchen. Andrea tells Lori that she shouldn’t have taken the knife away, Beth needs to learn how to live on her own. Lori gets in Andrea’s face because she missed laundry. Andrea is shocked, she is on watch against Walkers. Lori calls Andrea insane, she in return calls her self centered. Andrea goes on to tell Lori that she lives in a fairy tale, everything is not ok just because she has a husband, a son and a baby on the way.

Rick finds a gun, he is on his back on the ground and has three Walkers on him, he shoots the first one in the head repeatedly, which kills all of them. Meanwhile, Shane is trapped in a bus, with tons of Walkers trying to get in. He comes up with a plan cut his hand, he rubs the blood near the door of the bus to attract the Walkers, but his plan does not work as he thought it would.

Maggie takes a break from Beth, Andrea goes to watch over her. Andrea tells her that the pain doesn’t go away, you just make room for it.

Russell is with Rick, he tells him that they can run while the Walkers are trying to get Shane in the bus. Shane sees the two leave and is shocked that they would leave him, there are actually about six at the door of the bus after him.

Andrew left Beth and when alone, she broke a mirror and cut her wrists, Maggie and Lori find her. Maggie comes after Andrea, blames her for Beth trying to kill herself because she left her alone, she tells her never to come back to the farm. When Andrea walks away, Lori tells Maggie that Beth wants to live, she didn’t kill herself.

Rick puts Russell behind the wheel of the car, while Rick hangs out the window and shoots the Walkers at the bus, Shane runs to the back of the bus and jumps out and in the car. They drive down the road, then they put Russell back in the trunk of the car. Shane and Rick are alone, Rick tells him that if he is going to kill Russell, he will have to kill him as well. He goes on to tell Shane that if he wants to be with them on the farm, he has to follow his lead and trust him. The two get back in the car and drive back to the farm deep in thought.

Well, that’s it for another episode and this one had my heart racing. Make sure you come back tomorrow and read our full wrap up.