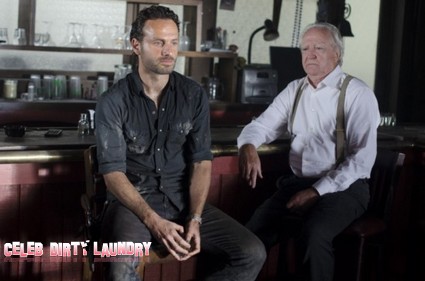 Did you watch The Walking Dead ‘Nebraska’ tonight? We did and we recapped it for you here!  Tonight, The Walking Dead was finally back with an all new episode.  Were you shocked that Hershel was upset about the Walkers being shot and wanted Shane off his land? What does it take for them all to understand that the Walkers, including Sophia, in the barn would have killed everyone?

Maggie professed her love for Glenn, do you think she should have waited to tell him? What can really come out of a relationship between them, it’s not like Hershel will give his blessing, will he?

I feel sorry for poor Carl, don’t you think it’s sad that he doesn’t have a chance to be a kid? Thank goodness Lori had the sense to send him to the house when they were getting rid of the bodies.

Shane is pissed off with Dale, he didn’t pull the trigger to kill any of the Walkers. What do you think about Dale? I am really not liking him, he gets on my nerves. What did he expect Shane to do, stand there and watch the Walkers kill everyone?

Carol felt that the Walker was not really her daughter Sophia, I understood what she meant and don’t you think Hershel should have felt the same way?

Did you think Lori was overreacting when Glenn and Rick went to find Hershel? I thought she did, they were two men with guns which is safer than her heading out after them with only one gun. I can’t believe she did that after being against them going out in the first place. What am I missing here?

Do you think Dale is right about Shane? I don’t and I hope a Walker gets him, don’t you?

I can’t believe Hershel doesn’t want to leave the bar when Rick and Glenn tell him that Beth is ill. Were you surprised at his reaction?  He hasn’t much family left, he should have left right away to get back to her.

I was shocked when Lori’s car crashed, but didn’t you think she was stupid for heading out alone? What do you think is going to happen next week?  If she does survive the crash, will she find the gun or will the Walkers get her first?

When Rick shot the two guys in the bar, I think he may just have redeemed his group to Hershel, what do you think? Those two guys, Dave and Tony were up to no good and Rick did what he had to, for everyone to survive.

Sound off your comments below, tell me what your favorite part of tonight’s show was.