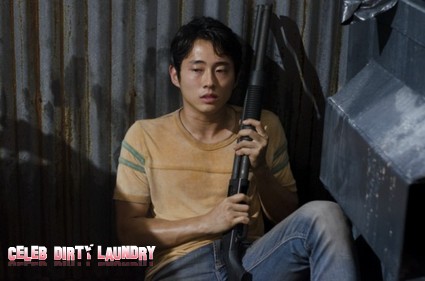 Did you watch The Walking Dead tonight? If you missed it, you can read the full official recap HERE. ! In our wrap-up we have some observations of last night’s show and some questions.

When Lori was trapped in the car, I thought she was such an idiot, didn’t you? She tells Rick not to go into town with Glenn and she heads out alone, duh?

I found it was really scary when Hershel, Rick and Glenn were in the bar, didn’t you? I was thinking one of them was going to get hurt. When the Walkers started getting closer, I was sure that they were going to get one of them. When Rick pulled the kids leg off the fence, I was grossed out – what about you, didn’t you find that was disgusting?

I was surprised at how long it took everyone to notice that Lori was missing, weren’t you? Really, if we lived among Walkers, I think I would be worried if someone was missing for five minutes.

Darryl was mean to Carol tonight, blaming her for her daughter’s death, I thought he was out of line, what about you?

Shane went out and found Lori, you would think everyone would be happy that he risked his life to find her, but no, they and her are all mad at him for lying to her that Rick, Hershel and Glenn were back. Are these people all idiots? Can’t they understand that he did it because he truly cares about her?

Carl was shocked to find out that Lori is pregnant, what did you think about him wanting to name the baby Sophia if it’s a girl? I thought it was nice.

I was shocked that Rick, Glenn and Hershel brought Randall back with them, don’t you think that they were putting everyone in danger? I was really upset when Hershel was rude to Shane about his worrying that they brought the kid to the farm. Are you upset about how everyone treats Shane badly? Last week Shane killed the Walkers in the barn and a lot of people were made at him, it’s almost as if he is the only ones that realizes that it is “kill or be killed”.

When Lori was talking to Rick about Shane, saying all those horrible things about him, like he killed Otis and he’s a loose cannon, I could have screamed. Just when did Lori turn into such a manipulative bitch, did I miss something? After Lori said everything she did to Rick,. I almost wished the Walker would have gotten her when her car crashed.

What did you think about tonight’s show? Did you love it or hate it? I think Shane is right, Randall’s friends may have left him at the bar, but they are going to be returning to get revenge on Rick killing their two friends and when they find out Randall is there, it is only going to make it worse.

Next week’s show is called ’18 Miles Out’ and we have the sneak peek video below for you.  Let us know what you think?