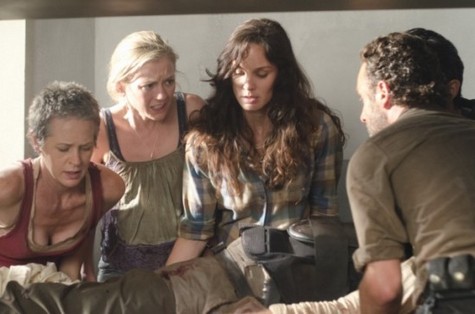 Tonight on AMC their super popular zombie show based on the most successful and popular comic book of all time THE WALKING DEAD returns with a whole new-episode.  On tonight’s show called “Sick” a life hangs in the balance. Complicating matters, the group must also deal with a potential threat to their new surroundings.  Did you watch last week’s season 3 premiere?  We did and we recapped it here for you!

On last week’s show with the birth of Lori’s baby just around the corner, the group had to find a new safe place to live and prison turned out to be their next home. There has been a rumor floating around that Carl is going to be getting himself a girlfriend.  From the looks that Carl and Beth were giving each other in last week’s episode  it appears that he is going after an older woman, Beth.

On tonight’s show after a traumatic event, a life hangs in the balance.  The preview suggests it is Hershel because the group can’t stop the bleeding from the bottom part of his leg that Rick amputated.  Complicating matters, the group must also deal with a potential threat to their new surroundings.  Rick is determined to keep the prison because they spilled blood to get it, is it Hershel’s? One thing is for sure, this season there are going to be some major characters dying and I hear it could be Lori or Glen. In the preview for next week, we see a grave with a cross on it and I doubt the group would do that for any of the walkers!

Tonight’s The Walking Dead Season 3 episode 2 is going to be exciting, and you won’t want to miss it. So be sure to tune in for our live coverage  of the new episode of The Walking Dead — tonight at 9PM EST! While you wait for our recap, hit the comments and let us know how know what you thought of TWD’s season 3’s premiere episode last week.   Check out a sneak peek of The Walking Dead “Seed” below!  Don’t forget to come back at 9PM.

Tonight’s episode: Daryl and T-Dog try to hold off the other humans they found while they were fighting off the walkers and cutting off part of Hershel’s leg.

The group arrive just in time at the prison block where the women are. Everyone is trying to stop the bleeding from Hershel’s leg while Daryl keeps a close eye on the doorway and is prepared to shoot the other humans when they arrive. There are five guys and they don’t look too friendly. T-Dog walks in, gun aimed and tells the five to get out. Rick joins the stand off and tells the five that they are too many for them to handle and they might as well leave. Rick asks them how long they have been trapped in the cafeteria and they tell them 10 months, they have been waiting for the Army or National Guard to show up. Rick tells them like it is, there is nobody outside the prison, more than have the population has been wiped out and there is no more government. The five guys are inmates and are all shocked when Rick takes them outside and shows them all the dead walkers, he also tells them that they are all infected. The inmates want Rick and his group to leave because they believe that the prison belongs to them. Daryl tells the inmates to leave and try their luck on the road. Rick tells the inmates that they will help clear out a block for them, but they must share half of the food they have left and if he catches any of them near their cell block, he will kill them.

The inmates take Rick and the group to where they have their food stored, there is a lot. Meanwhile, Hershel is still alive with Lori and Carol watching over him. Glenn is consoling Maggie, she is convinced that they are going to lose Hershel. Maggie goes over to Beth and tells her not to get her hopes up too high because they may in fact lose Hershel.

Rick and T-Dogg arrive back to the group’s cell block with lots of food while Lori assures Rick that the bleeding has stopped and Hershel is stable, for now. Rick explains to Lori about the deal he made with the inmates, she asks what are their options and he tells her that it’s either he helps them survive or he kills them, Lori tells him to do whatever it takes to protect them.

Rick, T-Dog and Daryl coach the inmates on how to take down the walkers while Glenn tries to keep everyone calm as they watch over Hershel. Maggie is alone with Hershel and tells him that he doesn’t have to fight anymore, he doesn’t have to worry, she will take care of Beth, she goes on to thank Hershel for everything.

Carl went out on his own to the infirmary to get supplies and Lori is furious that he went out on his own, meanwhile, T-Dog, Rick and Daryl are with the inmates fighting off walkers. The biggest of the inmates gets scratched bad on his back, Rick knows he is infected and there is no hope. One of the other inmates, attacks the big one and literally hacks his head off until he is dead with a crowbar. I guess we can figure out that these inmates were obviously not in prison for petty theft!

Carol takes Glenn aside and tells him that she has to practice on one of the cadavers in order to be able to perform a c-section on Lori with Hershel being out of commission.

Meanwhile, Daryl is disturbed over how the inmate killed his the largest inmate. That same inmate goes to kill a walker and first almost hits Rick in the head, then throws a dead walker on top of Rick who is clearly not impressed with the guy. Rick loses it and hits the machete right through the guys head. There are three inmates left, one is named Oscar and one Matt, the other has taken off running and Rick is after him. Rick finds him out in a yard with walkers and doesn’t save him, he lets the walkers get him.

Maggie noticed that Hershel is dead, after Beth starts screaming Lori runs in and tries to revive him and all of a sudden he grabs for Lori and Maggie pulls her off of him with Carl pointing a gun at him, just in case.

Matt is begging for his life, he wants to live. Oscar on the other hand has never pleaded for his life and tells Rick he is not about to now. Rick, Daryl and T-Dog leave Mat and Oscar to their new cell block, T-Dog tells them to take the bodies outside and burn them.

The group is back and Carl tells Rick that Lori saved Hershel after he stopped breathing. Rick walks into the cell to find Hershel hand cuffed and all of a sudden, he wakes up. Beth and Maggie are thrilled, Rick takes off the hand cuff while Hershel grabs to hold his hand. Everyone is thrilled that Hershel is ok, but Lori walks out and Rick goes after her. Meanwhile, in the court yard, Carol practices on the cadaver, but someone is watching.

Lori is also outside with Rick, in a different area, he tells her that she is not a bad mother. Lori tells him it’s a good day, they have food and Hershel is alive. Lori goes on to tell Rick that there is no “us” to talk about any more, Rick puts his hand on her shoulder and tells her that he is grateful for what she did in saving Hershel.