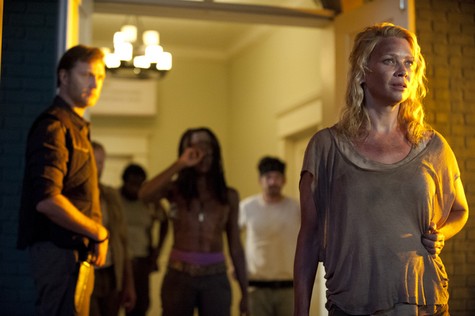 Tonight on AMC is an all new episode of THE WALKING DEAD called “Walk With Me.”  On tonight’s show after witnessing an accident, Andrea and Michonne are introduced to a new community of survivors. As conflicts arise with their new acquaintances, a decision must be made.  Did you watch last week’s season 3 episode 2?  We did and we recapped it here for you!

On last week’s episode, it went from gruesome to more gruesome   In another gruesome part, it’s was time for a zombie C-section practice. Carol wanted to prepare for Lori’s impending child birth and practiced on a walker, “I need experience, and we have plenty of cadavers,” she told Glenn before she began her gruesome experiment. Someone unseen outside the prison was watching from the trees, however, Carol was unaware as she was intent on her gruesome task.

On tonight’s show Andrea and Michonne find some new survivors and they must make a critical decision. Things are moving rather quickly on The Walking Dead and the Governor’s crew is shortly going to be introduced. In the preview for next week, Andrea and Michonne discover a perplexing smoke plume which actually turns out to be a helicopter crash.

Andrea will find herself blindfolded and Andrea and Michonne are taken to Woodbury where their  weapons are taken from them and they feel like prisoners.  We get a peek at Merle, Daryl’s brother who is back and living in Woodburt! How has Merle’s time away from the group changed him?  How will Daryl feel about his brother being alive? Andrea tells the Governor that she was separated from her group and he immediately offers to find them.

Tonight’s episode: There is a helicopter in the air with some heavily armed guys inside and they get hit, the helicopter is going down and crashes hard. Meanwhile, in the distance, Michonne and Andrea see the explosion. The walk to the crash site takes its toll on Andrea, so Michonne decides to go check out the crash herself to check for survivors. All of a sudden, Michonne sees some cars arriving at the crash and hides out with Andrea hoping not to be seen. They watch the group who arrived look for survivors, they find a breather and kill several walkers that try to approach them. Our newest character, the Governor, stabs one of the survivors in the head who is amputated from the waste down and both Michonne and Andrea look on in horror. Michonne’s pet walkers start making a lot of noise and she is forced to decapitate them to keep them quiet which actually alerts the group to their whereabouts. Merle is the one to find them and Andrea passes out cold in front of him when he tells her he is her old pal.

Andrea and Michonne find themselves blindfolded and in a vehicle heading to somewhere. The girls find themselves in a room and getting medical attention for Andrea. Merle comes in and tells him that when they found him he was almost bled out, then he asks Andrew if she has seen his brother and she tells him not in a long time. Andrea also lets Merle know that his brother went back for him and wanted to keep looking, but things happen and a lot of people died, she was separated from everyone about seven months ago.

Andrea asks Merle right out, what does he want from her and he can’t believe she is asking that when she has medicine in her veins and as he says it, saved her ass – even though he did have a gun on them.

The Governor walks in the room and Andrea asks him why he stabbed the guy in the head and he says he turned, but they didn’t. He tells the women that they are guests, they are not prisoners and welcome to leave anytime they want to. In fact, he tells them that he is going to give them their weapons, ammunition, food and even a vehicle if they want it, they are welcome to go. Then, the Governor opens the door and welcomes the two to Woodbury. They find out quickly that the Governor is in charge and Woodbury is heavily guarded, he escorts the two to a room that is clean, with beds, food and water for the night.

Andrea and Michonne find themselves blindfolded and in a vehicle heading to somewhere. The next day, Andrea & Michonne get a tour of Woodbury and find out that there are over 70 people alive and happy to be there.

The pilot is alive and the Governor tells him that all his guys are dead, then he asks where are the rest of his people and promises if he tells he will go get them and bring them in to safety.

The Governor goes to talk to Merle, he wants to know about Andrea. He tells him that he knew her before he got handcuffed to the roof. The room they are in looks like a morgue and the Goveror is having Michonne’s two walkers examined to see why she had them and he realizes they were used for repellent.

The Governor then heads to spend time with Andrea and Michonne, he wants to know more about their survival out there. The conversation turns to the future, the Governor tells them that they are going to take back control. Michonne then gets up and demands her weapons again, she wants to leave.

Andrea and Michonne take a walk and she tells her that after seven months together, she still feels like she doesn’t know her. She goes on to say that she is so surprised on how easy it was for her to take our her two walkers when they were with them all winter but Michonne tells her that it wasn’t as easy as she thinks

The Governor goes to see the pilots’ (Wells) friends and one by one, he takes them out and kills every one of them. The Governor personally bashes one of them to death with a gun, then steals all of their ammunition and supplies with Merle and some of his other men.

Back at Woodbury, the Governor has a town hall meeting with his people and tells them that he went out to find the pilot’s people and the walkers got there before they did, but they did take their supplies and everyone should be thankful. Michonne looks on and you know she doesn’t believe a word that he says. Andrea approaches the Governor and asks him his real name, he says he never tells.

At his home, the Governor enjoys a drink, there is a picture of him and what appears to be his wife and child, the wife looks surprisingly a lot like Andrea although he doesn’t look like he’s that much in pain, he has a naked women in his bed. He goes into a room and sits down in a chair, in front of him there are fish tanks with walker heads, the Governor’s private collection and two of them are the ones that belonged to Michonne.