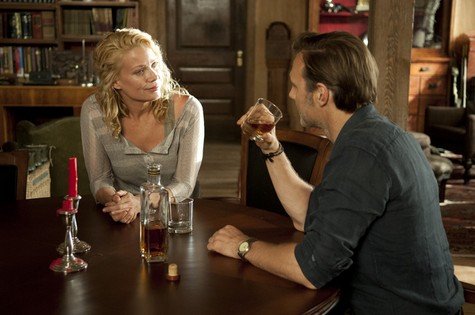 Last night was an all new episode of THE WALKING DEAD and the episode was insane, can they keep this up all season?  On episode two, two of the inmates were taken out by Rick.  One of them, Tomas, brutally decapitated his fellow inmate, Big Tiny after he was scratched and infected by a walker…. crazy, crazy.  Can’t wait till next week, in the meantime we have managed to get our hands on a sneak peek video and some spoilers of next week’s episode called “Walk With Me” to wet your appetite!

Tonight’s epsode went from gruesome to more gruesome   In another gruesome part, it’s time for a zombie C-section practice. Carol wants to prepare for Lori’s impending child birth and practices on a walker, “I need experience, and we have plenty of cadavers,” she told Glenn before she began her gruesome experiment. Someone unseen outside the prison is watching from the trees, however, Carol is unaware as she is intent on her gruesome task.  Did you watch this week’s episode of The Walking Dead “Sick”?  If you missed any of it, you can read our full and detailed recap here.

Spoiler alert: If you’re one of those people who doesn’t like spoilers, stop reading now! We have some juicy spoilers for you about the season 3 episode 3 of AMC’s “The Walking Dead.”

In the next episode, Andrea and Michonne find some new survivors and they must make a critical decision. Things are moving rather quickly on The Walking Dead and the Governor’s crew is shortly going to be introduced. In the preview for next week, Andrea and Michonne discover a perplexing smoke plume which actually turns out to be a helicopter crash.

Andrea will find herself blindfolded and Andrea and Michonne are taken to Woodbury where their  weapons are taken from them and they feel like prisoners.  We get a peek at Merle, Daryl’s brother who is back and living in Woodburt! How has Merle’s time away from the group changed him?  How will Daryl feel about his brother being alive? Andrea tells the Governor that she was separated from her group and he immediately offers to find them.

How will Merle react to seeing Rick again knowing that he left him for dead? Will the group finally call into question Rick’s leadership?  One thing is for sure, the Governor is coming and the group might just have to decide whether they want to remain under Ricktatership or join the Governor. Every episode is explosive and you won’t want to miss next week’s, Join us here at Celeb Dirty Laundry for the full and detailed live recap.

The Walking Dead Season 3, Episode 3 “Walk With Me” airs on AMC, October 28th, 2012.   Check out the preview video  of episode 3 and let us know in the comments below what you think!