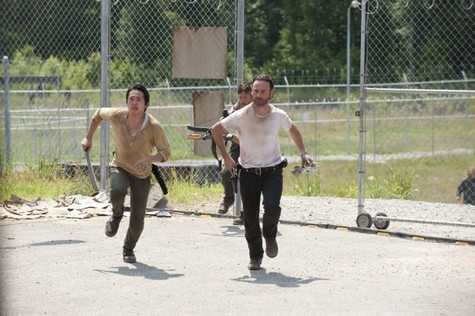 Tonight’s episode was awesome, did you see it?  This was the first episode where we didn’t see Rick and the group, but the Governor was finally introduced to us and what a horrific introduction that was. He seemed more less at first a victim heading out of the gate, but after he killed all the military guys and the aquarium scene, he definitely falls into the extremely creepy category for me. The only thing that I like about the Governor was how he had ahandle on Merle and why didn’t he want those military guys to help him man his Woodbury compound?  Did you watch tonight’s episode?  We did and we recapped it here for you!

Spoiler alert: If you’re one of those people who doesn’t like spoilers, stop reading now! We have some juicy spoilers for you about the season 3 episode 4 of AMC’s “The Walking Dead.”

Next week, Rick, Beth, Darryl and T-Dog go outside to clean up the dead bodies and look for Maggie and Glen to help, it turns out they are in the guard tower making out ’cause it’s important of course to get it on during a zombie apocalypse when everyone around them is drying! Someone was watching Carol perform the C-section last week,
was it maybe Merle that was watching her? Rick and the group will find the Governor’s compound, but before that they are taunted in a game of cat and mouse. Eventually, the group does put all the pieces together and they do realize that the Governor is nuts, how else can you describe a guy who spends his evenings staring at a collection of
severed heads like it’s a big-screen TV.

Rick thought the prison would bring safety for the group, but things begin to become hectic when someone leaves the gate open to the prison yard and the group is inundated with walkers. The prisoners that Rick and the group saved are missing, are they the ones that are causing havoc?

Meanwhile, Michonne finds blood on one of the military vehicles which furthers her suspicions about the Governor who has begun to sweet talk her, “We could use a soldier like you,” but she tells Andrea, “I’d rather take my chances out there than stay here.” How do you spell dumb? Well next week it’s Andrea, even though she and Michonne have their misgivings about the compound, she tells Merle all about Hershel’s farmhouse.

Back to Rick and the group, they will get separated and at Woodbury, Merle will make an appeal to the Governor.

It’s going to be an exciting show next week, you don’t want to miss it – so make sure you come right back her to Celeb Dirty Laundry for the live recap.  The Walking Dead Season 3, Episode 4 “Killer Within” airs on AMC, November 4th, 2012.   Check out the preview video  of episode 4 and let us know in the comments below what you think!