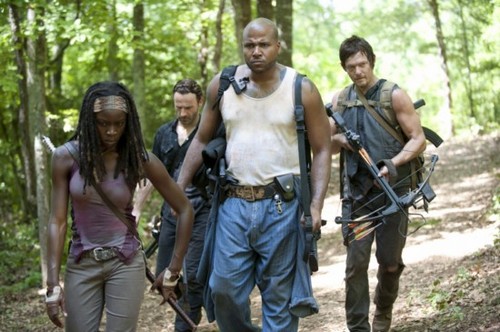 Tonight on AMC is an all new episode of THE WALKING DEAD called “When The Dead Come Walking.” On tonight’s show the Governor presses for information. A new guest arrives at the prison, forcing Rick’s hand.. Did you watch last week’s season 3 episode 5? We did and we recapped it here for you!

On last week’s show Rick was on the phone and told the caller that “we are dying here”. Meanwhile, Andrea jumped the wall of Woodbury, can you blame her after she was in the audience for the sick and twisted fight night? Perhaps Andrea should have left when she had the chance, ya think? A concerned citizen warned Andrea, “We’re not supposed to go over the wall!” and her escape doesn’t last that long because in the preview, the Governor tells Andrea, “You don’t have to be ashamed about liking the fight – I love it.”

On tonight’s show Michonne ends up at the prison with some walkers and I was shocked at first to see that they didn’t try to kill her right away, but don’t worry, next week they come after her behind the prison gate and she does some creative slicing and dicing until Rick takes her in. Michonne then goes on to tell Rick and the group all about the Governor and his dirty little town of Woodbury, she also tells them about Maggie and Glen’s abduction. I got a feeling the Governor is going to have a run for his money with Michonne and Rick teamed up together.

Tonight’s episode: Glenn is bound to a chair, Merle calls him an asshole for leaving him in Atlanta and hopes T-Dog went slow for not giving him the key. Merle wants to know where his baby brother is and if Glenn doesn’t tell him, he threatens to go to Maggie. Meanwhile, Maggie can hear everything in the other room and looks terrified.

Merle starts to beat up Glenn and he tries to fight back, but to no avail.

At the prison, Michonne is wounded and fighting off walkers with Rick watching her, she collapses and doesn’t see Carl shoot the walkers with he and Rick saving her. Rick lifts up Michonne, she is not bit, she has a gun shot wound. Daryl walks in and is wondering who the hell she is when he calls Rick to join him. Rick follows Daryl and is surprised to find Carol alive and well. Meanwhile, Michonne is left in a locked prison cell, where she is safe and can heal from her wounds.

At Woodbury, the Governor gets interrupted from a role in the hay with Andrea with a message that Mr. Coleman is ready.

Rick goes in to the cell to give Michonne food and supplies, they want her to talk. Michonne tells Rick, Daryl and Hershel about Woodbury and the Governor.

Merle has beat Glenn to a pulp and tells him that he is surprised that he is tougher than he remembered. Merle wants to know where everyone else is and Glenn won’t tell.

Rick takes Carl aside, he tells him that he has to go and if something happens, he is to lock everyone in the cell and keep them safe – most importantly, take care of his sister. Carl says that Dayl calls his little girl “ass Kicker” but he would like to call her Judith after his third grade teacher.

The Governor brings Andrea in to a room where their is an old man,Mr. Coleman, in a bed. Milton is in the room and there is soft music playing, he asks Mr. Coleman some questions to confirm who he is.

Merle brings in the big guns, he brings a walker in to the room and lets him loose, shuts the door and leaves. Glenn has to fight off the walker while having his arms duck taped to a chair and miraculously he does, take that Merle!

It turns out that Mr. Coleman has prostate cancer – Milton has never seen someone turn, into a walker, he thinks that when Mr. Coleman turns he will still be himself, in his mind.

The Governor meets with Merle who tells him that they know who Andrea is but won’t budge on telling where his people are. Merle was just about to head over to talk to Maggie when the Governor says that he will take care of it.

The Governor begins by releasing Maggie’s hands then requests to be seated. He then tells Maggie that he will bring her back to his people and tells them that it is all a misunderstanding. Maggie wants to see Glenn first, but the Governor tells her no because he is dangerous. He then tells Maggie to stand up, take off her shirt; she gets up and refuses to take off her shirt to which he tells her if she doesn’t, he will bring Glenn’s hand in the room with them. Maggie then takes off her shirt, then her bra as instructed by the Governor who is taking off his belt. The Governor slams Maggie’s head down to the table and she tells him to do whatever it is he wants to do and go to hell.

Michonne, Rick, Daryl and Oscar have gone out in search of Glenn and Maggie when they reach an area in the woods where there are tons of walkers. They find a cabin and go into it only to find a guy alive who pulls a gun on Rick. They get into a fight and when the guy tries to open the door, Michonne kills him. They throw the dead body to the walkers to keep them busy with a feast while they all run out the back door.

Mr. Coleman is turning, Milton keeps talking to him and is convinced that if he takes of his arm restraints he will have more success. Andrea tells him that the moment the restraints are off he is going to lunge, but Milton doesn’t listen and the moments he is lose, he does lunge and Andrea stabs him in the head.

The Governor takes Maggie into the room to see Glen, with her top half naked. He threatens to kill one of them if they don’t tell where their camp is, Maggie reveals all.

The Governor is shocked that ten people are alive and holding up at the prison, he turns to Merle and tells him that his brother has done what Merle said wasn’t possible. Meanwhile, Rick and the group are outside Woodbury and the Governor tells Merle to gather a small group and head to the prison, he wants to know exactly what he is dealing with.

Andrea is back to see the Governor, she pours herself a drink and tells him that Mr. Coleman died.