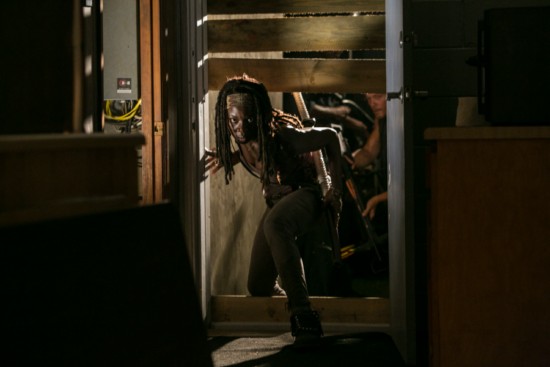 Tonight on AMC is an all new episode of THE WALKING DEAD called “Made To Suffer.”  Sadly tonight is the mid-season finale and we are not going to have our TWD fix for a couple of weeks.  On tonight’s show Andrea steps up as the people of Woodbury are thrown into uncharted territory. At the prison, a new threat arises. Did you watch last week’s season 3 episode 7? We did and we recapped it here for you!

On last week’s show Michonne ended up at the prison with some walkers and we were shocked at first to see that they didn’t try to kill her right away, but don’t worry, next week they are going to come after her behind the prison gate and she does some creative slicing and dicing until Rick takes her in. Last week Michonne then went on to tell Rick and the group all about the Governor and his dirty little town of Woodbury, she also told them about Maggie and Glen’s abduction. I got a feeling the Governor was going to have a run for his money with Michonne and Rick teamed up together.

On tonight’s show the Governor wants to get rid of Maggie and Glenn because the longer they are at Woodbury the stronger the chances are that Andrea will find out about them. Daryl has mixed emotions when they storm Woodbury, Rick needs him but his feelings for his brother might just get in the way.

Michonne finds someone behind a mask, hands bounded and in a closet; and we all know that it is Penny, the Governor’s daughter who turned into a walker – the cat is out of the bag!

Tonight’s episode: It’s a new day in zombie land and we first find some new people that are trying their best to outrun some walkers but it doesn’t take much for one of the women to get a huge chunk of her arm bit out by a walker. The group should dump the woman that has been hurt, but they decide to keep her and head into a part of the prison.

Back at Woodbury, Andrea is brushing her hair in front of the mirror when the Governor comes up and she tells him that she is going to help Milton cremate Mr. Coleman’s body. The Governor is pleased, he thinks Woodbury is starting to grow on Andrea.

The governor is now alone and calls his daughter Annie out of her cage, she has her head covered and is chained like an animal. The moment he takes the cover off her head, she tries to bite him. This is sick, he has music playing, he sings to her and tries to calm her down. He has a bowl of raw meat but screams at her to look at him, when she doesn’t he puts her back in the cage.

Maggie and Glenn are alone, still captive, he asks her if she was raped – she says no. Glenn hugs her, then struggles to get up, heads on over to the walker he killed and gruesomely tears the weapon out of the walker’s limb and hands it to Maggie.

Rick, Oscar and Daryl are outside Woodbury with Michonne cloce by.

The Governor and Merle are discussing the prison and he tells Merle that they need to take out the group that lives there. Merle is worried about his brother, but the Governor assures him that he will be fine. Regarding Maggie and Glenn, the Governor thinks the longer they are there Andrea will find out, so he tells Merle to take them to the screaming pits.

Michonne and the group are held up in the house that she once shared with Andrea at Woodbry, there is a knock on the door – then an old man enters and wants to know who is in there. Rick tackles him while the rest bound and gag him.

Back at prison, Axel is talking to Beth when Lori walks up and tells him to get away. He calls Lori and lesbian and she tells him she is not to which he is excited and wants to make a pass at her, but she tells him not to bother.

Merle goes in to get Beth and Maggie, they try to overtake him but it doesn’t work. The two soon have their heads covered with sacks when a smoke bomb goes off, it’s Rick, Daryl, Michonne and Oscar to the rescue.

The town folks are freaking out, they have seen the smoke bomb explosion and the old man the group tied up is now loose and tells the Governor and Andrea that they are under attack. The group has Beth and Glenn, they are all together but Michonne is missing. Glenn and Maggie tell Daryl about Merle, how he threw a walker at Glenn and fully intended on killing the two of them. Rick tells everyone it is time to go, Daryl is afraid to leave his brother behind.

Merle tells the Governor that the group killed a man, they are hostile. The Governor tells Andrea to do door to door to check on everyone while he gathers his best and goes after the group.

Rick and the group are in an all out assault trying to get out of Woodbury. Andrea sees all the shooting while she is going door to door and joins in on the shooting. The Governor sees Andrea, goes over to her and she tells him that she sees him. he is nervous, but she only got a glimpse of Oscar in overalls and he tells her they are escaped convicts.

Rick sees someone shoot Oscar, he thinks it is Shane, but it’s not – he shoots him dead.

Back at prison, Hershel tells Carl that they only have milk left for the month. They start hearing screams, Carl wants to go check it out and when Hershel tries to block him, he ends up letting him go. Carol heads out to through the prison and the screams are getting louder and louder, all of a sudden a walker comes at him and he kills him. Then he enters a room where he finds some people, he tells them to follow him and hurry.

Michonne is in the Governor’s apartment when she hears banging at the closet door, she opens it only to find his fish tanks with the severed heads and his daughter zombie. Honestly, I didn’t think anything could jar Michonne, but I think the fish tanks did it. Michonne approaches the daughter, she takes off her chains first not realizing she is a walker. Michonne takes off the girl’s hood and when she sees that she is a walker she is about to kill her when the Governor comes in and begs her not to do it. Michonne takes the blade and shoves into the girl walkers mouth. The Governor jumps Michonne, they get into a big fight, he smashes her head into one of the fish tanks and they hit the floor, the amputated heads are still alive and the Governor tries to get one to bite Michonne. Michonne grabs a piece of broken glass and stabs the Governor in the eye, just as she is about to finish him off, Andrea comes in and aims a gun at her. Andrea lets Michonne leave, who by the way doesn’t get the chance to finish off the Givernor, but then Andrea sees the tanks and  probably realizes how creepy her boyfriend really is. One eyed Governor grabs his daughter and cries.

The new group of people are safe with Carl and his group. The woman is starting to turn, Carl tells them he can help them but first things first, they need to kill off the woman. While they are about to do it, Carol locks them in and tells them they will be safe, they have food and water. One of the women is very angry, but one of the men quickly calm her down and reminds her that it is the best circumstances that they have had in weeks.

At Woodbury, the Governor is getting his eye attended to when Andrea asks why Michonne was in her apartment, he claims she came back to kill him. Andrea wants to know why he had the fish tanks,  he tells her that it prepared him for the horrors outside. Milton and Merle walk in, he tells them that he was attacked to which Merle assures him that he will go after the attackers in the morning.

Michonne has finally made it over Woodbury’s fence and Rick no longer trusts her, he wants to know where she was. Michonne tells him that he brought them there to save Beth and Maggie and either way, moving forward, they need her.

At Woodbury, it is time for another fight night. Andrea is sitting in the audience when the Governor walks in with one of his eyes patched up. He tells the towns people that he thought they were past the days when they all sat scared like in the first days of the outbreak. He goes on to say that he failed them, he promised to keep them safe but he can’t any longer because he is afraid of terrorists who want what they have and worst, one of those terrorist is one of their own, Merle. The governor says that Merle led the terrorists in, he lied and betrayed them all.  The Governor’s men bring in Daryl, the proof that Merle did this since they are brothers. The tows people are angry and looking for blood. The Governor walks over to Merle and tells him, you wanted your brother, now you got him.

Wow, what an ending. I thought it was going to be a blood bath, but that’s not what we got tonight. Instead, we were shown exactly how sick and twisted the Governor really is.