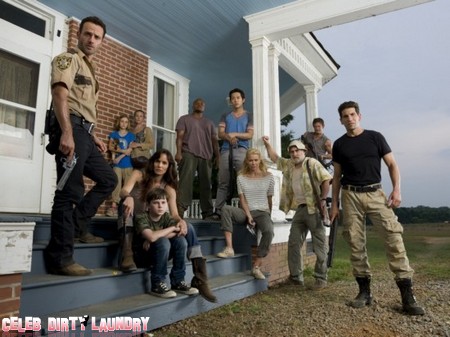 Last night was the final episode of season 2 of The Walking Dead. I don’t know about you, but I was on the edge of my seat and thought this may have been the best episode of The Walking Dead yet. At least it is certainly up there with the best of season 2. I loved the episode, the action was great, the introduction of the new hooded character was amazing. Did you see the episode, if you missed any of it, you can read the full recap HERE.

Tonight’s episode left us with some little hints about what will be happening in season 3. One of the things I noticed, was the helicopter. Who do you think will be in the helicopter? On the The Walking Dead aftershow, “The Talking Dead”, there was a little hint that it may be Merle. Ever since bad ass Merle cut off his own hand to escape the walkers and vanished in season 1, I’ve been wondering about him and waiting for his return. At Wondercon this past weekend, actor Michael Rooker, who plays Merle revealed that he will indeed be returning to season 3, although he wouldn’t reveal any more details except that he had to lose 20 pounds to return to the role. I think the weight loss will have something to do with the prison we got see at the end of the episode. The last time viewers saw Merle, it was a hallucination in the mid of his pain-addled brother Daryl. I think he is being held captive in the prison by The Governor.

The Walking Dead creator Robert Kirkman also revealed tonight that actress, Danai Gurira will portray Michonne in the third season of the show. The character was briefly seen in tonight’s second season finale when she was shrouded by a hood yielding a samurai sword and came to Andrea’s rescue; she is a major character from the comics. The two zombies she had chained to her are significant, they are her boyfriend and his best friend in shackles, lacking their arms and jaws in leashes made of chains.

British character actor David Morrissey has been cast as The Governor in Season 3 and will be the “leader of Woodbury, a small settlement of survivors, and becomes the chief antagonist” for Rick and his group. Could Woodbury be the prison we glimpsed in the aerial view just beyond where the Rick and the group were camping for the night? I’m, sure it is because that is where the group is going to end up next.

The helicopter and the prison definitely suggest that Rick and his group are no longer alone.  Let us know your thoughts about Season 2 and what would you like to see in Season 3?  Sound out in the comments below!