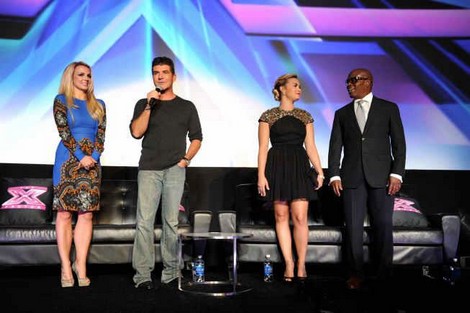 Tonight on FOX the X Factor USA returns with it’s final audition of week 2 on “Auditions #4”.  Contestants continue to audition for the judges in hopes of winning a $5 million dollar recording contract.  If you missed last night’s  auditions#3 episode you can read our full and detailed recap HERE!

On last night’s show it was a fabulous night, with a few hits and misses by the judges. The stand-outs came in the form Diamond White and Panda Ross.  Diamond White, a 13-year-old struggling teenager, did a rendition of “It’s A Man’s World” by James Brown and boy, did she blow the roof off the X-Factor arena.  There was a mature gospel touch to the song, which made this one of our favourite performances to date. The judges gave her 4 out of 4. We’re giving her 10 out of 10! Diamond, that was exquisite!

The most memorable performance of the night came in the form of Panda Ross, a 40-year-old woman with an infectious attitude and stellar vocals. She did a rendition of “Boring It On Home To Me” by Sam Cooke. Her performance was strong, over-the-top and OMG.  What did you think of Diamond and Panda’s performances?  Hit the comments and let us know your thoughts!

On tonight’s show, the second week of auditions come to a close.  I wonder how many more talented singers our judges Britney Spears, Demi Lovato, LA Reid and Simon Cowell will find tonight.  Of course I am also looking forward to seeing the crazy ones :-)

Stay tuned to Celeb Dirty Laundry for a full live recap of tonight’s episode. We will keep you up to date on all X-Factor news, reviews and spoilers and make sure to check back here regularly for more information on your favorite television shows!  So don’t forget to come back to this spot at 8PM for our live recap of The X Factor USA Season 1 Week 2 Auditions #4 recap at 8PM EST!

Tonight’s Recap: Tonight we are in Greensboro, NC for auditions.  Britney is excited to be in the South.  Demi is tired because she is on tour at the same time as she is doing the auditions.  Simon and LA are excited for the evening.  We are treated to Simon getting his taste of the best grits in Greensboro for the opening of the show at Jake’s.

Finally the judges head out on stage.

Willie Jones, 17, from Louisiana.  Willie says there is absolutely nothing to do in Louisiana, he is here with his family. Josh is singing “Your Man.”  Judge’s comments:  LA: “Willie Jones you are an absolute original, perfect.”  Britney: “I was very surpised ai was not expecting it, it was original!”  Demi: What I like about you is you are really likable, I love that about you.  Simon:  Willie this is why I wanted to come to Greensboro, you have gone beyond my expectations.  You have a sensational recording voice.”  All judges vote YES!

Kelvin McMangle, he puts lawnmower handles on landmowers and he forgot what he is going to sing, he has a really thick Southern accent.  He is very odd and he is singing a combination of different songs and stops all of a sudden.  Judge’s comments: Simon: I could not understand a single word of that.  Britney: Tells him she is afraid she is related to him.  All the judges say NO!

Julia Bullock and she is 18.  She is hear with her family, friends and band members.  She is singing “Pumped Up Kicks.”  Judge’s Comments: Simon: Julia, I think you are really, really good.  I like your image and your taste.  You are one of my favorites.  Britney:  You definitely have a unique sound.  You are a star.  LA:  You are exactly what I have been looking for, from the moment you walked on I had a feeling.  Demi:  I really like you and I feel you are super talented.  All 4 judges vote YES!

Krysten Colon, 21, who is a hairdresser and she is ready to be a superstar.  She is singing a song by Adele called ‘Don’t You Remember.’  Judge’s Comments: Simon – It is a same we had the Adele song and I feel like we are not hearing the real you.  I think you need a classic song. Simon tells her he wants to see her later and asks her to come back.

Jeffrey Gutt a single Dad and he feels this is his last change, failure is not an option.  He is singing “Hallelujah” by Leonard Cohen.   The audience goes insane and he gets a standing ovation. Judge’s comment: LA:  I think you are unbelievable and you knocked it out of the park.  Britney: I loved it.  Demi: You have an amazing grit and it changed the song.  It was amazing.  Simon:  I have heard that song a lot and it was one of the most brilliant auditions I have ever heard.  All the judges vote YES!

Marchello Penn a very bad singer get the power to go down mid-performance.  It is raining and there is water leaking on the judges.   Next of the bad as the thunder roars – Byron Edwards.  Simon remarks everything is going wrong.  More bad singers as the lightening and thunder continues.  According to the weather it is very dangerous conditions and the judges hope it picks up.

Krysten Colon AGAIN she is ready to impress the judges.  The thunder starts to roll again.  She decides to sing Whitney Houston – I Have Nothing.  Judge’s Comments: Simon:  The song was not working.  LA: Tells her she has blew it.  She does not have a voice, she has a decent voice but it is not good enough.  All 4 judges say NO!  She is totally pissed off and she has a meltdown.  She throws water all over the cameras.  They have to calm security when she picks up a chair.  She runs out of the building!

THE END – Join us next week for the X Factor Week 3 Auditions!