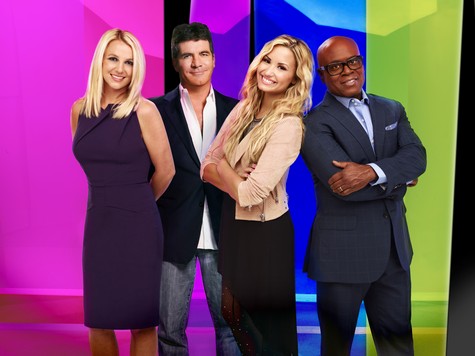 Tonight on FOX The X Factor USA returns tonight with night two of Boot Camp and contestants go head-to-head with their direct competitors.  The judges will complete boot camp and decide who moves ahead to the next round, “Judges’ Homes”  On last night’s show we saw the best, worst and most dramatic moments of the season so far.  If you missed last nights first night of boot camp you can read our full and detailed recap HERE!

On last night’s first boot camp which was in Miami, the judges were really tough (especially Britney Spears) and they eliminated half of the 120 contestants.  Rizzloe Jones (the cool rapper from Kansas City, Missouri), Quatrele Da’an Smith (the Lady Gaga lover), Jordyn Foley, Trevor Moran, Ben Westphal and several others, did not make it through to the next phase of Boot Camp with their below average/amnesiac/horrid performances. None of these cuts were exceptionally surprising.

On tonight’s show the contestants’ who survived the solo round are put into groups of two by the judges. The pairs then have less than 24 hours to prepare for a sing-off against the other duos in hopes of impressing the judges and making it to the next round, “Judges’ Homes”.

What did you think of the first night of boot camp?  Did any of your favorites get eliminated or are they still in the running for the $5 million recording contract.  Hit the comments and let us know!

Stay tuned to Celeb Dirty Laundry for a full live recap of tonight’s episode. We will keep you up to date on all X-Factor news, reviews and spoilers and make sure to check back here regularly for more information on your favorite television shows! So don’t forget to come back to this spot at 8PM for our live recap of The X Factor USA Season 2 Episode 8 Boot Camp # 2 recap at 8PM EST!

Tonight’s recaps: They have put the remaining acts in pairs so they can battle against each other.  One can make it, both can make it and neither can make it.  Both members of the paid must agree on the same song and the same section of the song to sing.

By the end of the task there will only be 24 acts left in the competition who will go on to the  “Judges Homes” round.

Tara Simon and Jennel Garcia it looks like Tara has convinced Jennel do a song that is more Tara’s style.  Simon: “I don’t know why you chose that song either of you.  You did not represent yourself.  Simon feels bad for Jennel because he realizes Tara picked the son.” Jennel felt out of her element, Tara is confident as usual.

Beatrice Miller and Carley Rose Sonenclar singing “Pumped Up Kicks.”  Simon thought they were both very good and Demi thhought since the two it was so hard when you are that

Vino Alan  and David Correy singing “What’s going on” By Marvin Gaye.  Vino totally thinks he blew it but the judges loved it especially Britney and Simon.  Vino thinks he ruined his opportunity.

Diamond White and Dinah Jane Hansen singing “What Doesn’t Kill You.”  The judges loved them both.  The girls think they did a good job.  Dinah messed the lyrics  a bit but picked it up.

Sister C and Lauren Jauregui  Britney thinks Sister C is annoying and so does Demibut LA Reid loved them.

Julia Bullock and Aly Brooke singing “Knock, knock knocking on heaven’s door”.  The girls think they did great but LA Reid says someone won and someone lost.

Jeffrey Gutt against somebody who they don’t bother to identify.

Tate Stevens and Willie Jones singing “Nobody Knows” Willie has a lot of problems with the song and Demi says, “I think Tate knew what he was doing,”  “Tate hustled him,” L.A. Reid says. Willie was really upset.

Arin Ray and  Normani Hamilton are battling.  Demi says her heart melted taking about Arin.  They were cute as a couple, there song not so much.

Jillian Jensen and LaTasha Robinson – this was sad  LaTasha totally loses it and breaks down in tears.  Jillian tries to help but it does not work.  LaTasha says, “Sorry I can’t do it.”   LaTasha was very upset.  Jillian did a good job.

It seems to be the evening of forgetting lyrics.

CeCe and Page are next – CeCe chose the song and Page is not happy about it!  Simon thought they both looked absolutely exhausted.  Simon said, “I have never seen anyone look so tired in my life!”

So no results today, of course, make us wait until next week.  Next week we will find out which 24 contestants will be going to the Judges Homes.