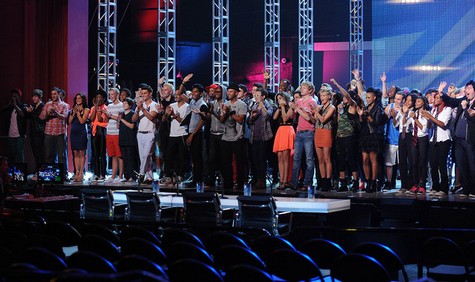 Tonight on FOX The X Factor USA returns with “Auditions #7.” It is Boot Camp time and it is time for tears and meltdowns and to see who makes it though and who is through with the competition.  If you missed last weeks last audition week you can read our full and detailed recap HERE!

The contestants will bring their all to impress the judges with hope to make it through to the Judges’ Homes.  Boot Camp will be rough, it brings out the best, worst and most dramatic moments on reality TV.  Many singers will be instantaneously eliminated and only a handful will remain to prove their worth at the judges’ houses.

The remaining contestants only one chance to prove to the panel of L.A. Reid, Demi Lovato, Britney Spears and Simon Cowell that they have what it takes to become a $5 million recording artist.  If you have forgotten the people who got through to boot camp you can see the full list here!

LA Reid said about boot camp, “I love the idea of going into Boot Camp and really turning it up for these contestants and making it even tougher for them because on the first audition, God knows how long they’ve rehearsed for their first audition. When they get to Boot Camp, they don’t have any time to prepare, so now it’s like we separate the boys from the men and see what they’re really made of. That’s exciting to me.”

Boot Camp is tough and many contestants crumble, one contestant said, “Boot Camp is the epitome of tough.”  Do you have any favorites that you are rooting for tonight?  Hit the comments and let us know your thoughts!

Stay tuned to Celeb Dirty Laundry for a full live recap of tonight’s episode. We will keep you up to date on all X-Factor news, reviews and spoilers and make sure to check back here regularly for more information on your favorite television shows! So don’t forget to come back to this spot at 8PM for our live recap of The X Factor USA Season 2 Episode 7 Boot Camp recap at 8PM EST!

Tonight’s recap:  Task one for the 120 acts that made it through to boot camp is to perform a song in front of each other. They stand up and shine or go home missing their big shot. All  are intimidated in front of 119 other acts right off the bat.

13 year old Diamond White is up first with a cover of Whitney Houston’s I Have Nothing Without You. She puts her own spin on the song and was in the unenviable position of performing first and setting the tone. She did great but as Demi Lovato points out, there are 119 more acts to follow.

Austin Perrini reminds me of a young boy-bander with a smooth soul sound. David Corey whips out Mercy and after a short snippet I want to see far more than I just got a glimpse of.

Jessica Espinoza is one I already remember and it’s not because of red dipped hair. She sounds like a mix between Pink and Melissa Etheridge and is just awesome. Jenelle Garcia is another to remember. She’s young but really can sing and spice up the stage.

Johnny Maxwell is a young rapper that is kinda cute and wanted it but totally messed up his lyrics. He is followed by a laundry list of people that let their nerves get the better of them. Lots of tears and hugs backstage as people crumble.

Emblem3 is an all boy band that had an audition that totally rocked. They sound a bit shaky this time out but they still stand out as one of the better groups here.

Tara Simon is a vocal coach that cranks up her sex appeal to get attention. She has a big voice, but I don’t necessarily think it’s a good one. I may be alone in that I’m sure. The never-expected-that vote goes to the kid that looked like he’d crank out something R&B and instead he did country! Very low singing voice that the judges split down the middle on.

Paige Thomas and Cece Frey both are little girls with big big voices. They both do back to back renditions of I Will Always Love You by Whitney Houston. Paige did great, but Cece still manages to blow her rendition completely out of the water. She made Paige somewhat forgettable which was nearly impossible!

The judges call the contestants back to the stage in three groups. As a whole those groups either all stay or all are leaving. The second group is leaving but Paige, Jenelle, Cece and Johnny are all just a few who make it through to the next task. Tune in tomorrow night for the next phase of boot camp battle!