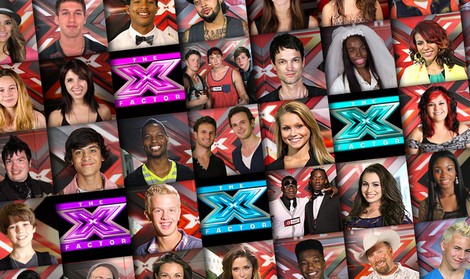 Tonight on FOX The X Factor USA returns with “Auditions #6.”   This is the last week of auditions and the boot camp contestant numbers get larger.  Tonight the auditions continue with more contestants trying to impress the judges in hopes of winning a $5 million dollar recording contract. If you missed last night’s auditions#5 episode you can read our full and detailed recap HERE!

On last night show we were ravaged by less than stellar and over-hyped auditions, but we were fortunately treated to a 15-year-old with a powerful voice and an emotionally charged Brazilian. The night was lackluster, mundane and had some of the worst successful auditions we have ever witnessed on The X-Factor USA.

The show was saved by 15-year-old Dinah Jane Hansen the first contestant of the night with her rendition of “If I Were A Boy” by Beyonce. This first time try-out achieved the impossible – she surpassed the vocal ability of one of the most intricate female vocalists in the current music industry.   What did you think about last night’s performances?  Did anyone stand out for your?  Hit the comments and let us know.

On tonight’s show The X Factor will deliver the last of the audition phase of the competition. And, by the night’s end, you will meet the 125 contestants who passed the test and will move onto the next phase: Boot Camp!

Stay tuned to Celeb Dirty Laundry for a full live recap of tonight’s episode. We will keep you up to date on all X-Factor news, reviews and spoilers and make sure to check back here regularly for more information on your favorite television shows! So don’t forget to come back to this spot at 8PM for our live recap of The X Factor USA Season 1 Week 3 Auditions #6 recap at 8PM EST!

Tonight’s Recap:  We open up tonight where we left off last night with contestant Trevor Moran.  Trevor passed out, he is 13 years old and they have called the paramedics.  He was over dehydrated and they gave him Gatorade and he was over excited and nervous.  He is up now and he is determined to go on.

Trevor Moran, 13, from San Francisco – Simon tells him he has one chance to do it and he looks like he is going to pass out but he starts singing. Trevor sang “I’ m Sexy And I know It” Judges comments: Simon: “You are not dehydrated anymore and I am not entirely sure it was age appropriate.”  LA: “You rocked the house.”  Demi: “You were so much fun to watch, you are too cute.”  Britney:  “I liked you a lot, I thought you were completely adorable, and I liked watching you”  All the judges vote a BIG YES!!!

They are in Greensboro, NC and Demi Lovato gives a birthday greeting to a boy in the audience.

Owen Stuart, 16, who talks about his girlfriend in NYC who he wants to marry.  Judges comments:  LA: I really enjoyed it, when someone raps it is difficult on this stage.  Britney:  It was a really good performance, but you did not wow me.  Demi:  Every girl in this audience wishes they were your girlfriend, the lyrics were romantic and I am impressed.  Simon:  I really liked it, I think you are focused and can get better.  Britney: NO, LA: YES, SIMON: YES, DEMI:YES – He is going to boot camp!

Freddie Combs, 40, from Tennessee he is a minister.  He use to be 920 lbs and now he is down to 540 lbs.  He is going to sing “Wind Beneath My Wings” and he is dedicating it to his loving wife. ahhhhh  Judges comments: LA: “Your voice is heavenly! Britney: “You voice was amazing.” Demi: “You have an amazing voice and it is touching with a lot of emotion. “ Simon:  “You know what, when I heard you sing I envisioned you healthy and happy!  If you are going to go forward we have to make a deal you have to work to get better”  All Four judges said YES!  LA and Simon make a deal with him he has to stand!

Kofoed Sisters, a group of four girls.  Simon says – years ago I sat on four cats and it sounded like that.  Simon voted for everyone a BIG NO!

We are treated to a bunch of really bad auditions.

Lauren  Jauregui , 16, from Florida singing “If I ain’t Got You” by Alicia Keys. Judges comments: Simon: “That Lauren is how you do it, one of my favorite auditions” LA: “You voice is so mature, perfect audition.” Britney: “I thought you were unbelievable, you were so good.” Demi: “You impressed me.”  Four judges vote yes for Lauren, she is on the way to boot-camp!

Jordyn Foley and she is 12 years old and she is here with all her family and all her friends.  Simon said before she sang, “Please tell me you are not going to sing Tomorrow?”  her face fell and she said YES…  Simon went on about how much he hated that song….. Mean Simon…  Judges comments:Demi: You are too cute, OMG, I really liked your performance.  Britney:  I think you have an amazing voice, it is beautiful.  LA: You are a bundle of joy.  Demi: YES, Britney: YES, Simon: NO, LA: Yes.  So she is going to bootcamp.

Auditions are over.  It has been a long road and they saw a lot of people.  Britney said she had no idea what to expect.  Simon is excited about this year.