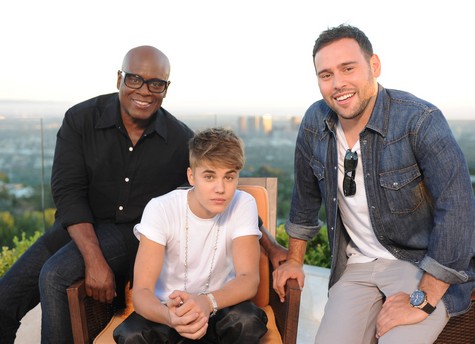 Tonight on FOX is an all new episode of The X Factor USA.  Tonight the “Boot Camp” round of THE X FACTOR comes to a dramatic conclusion as the Top 24 acts are chosen and the “Judges’ Homes” round begins.  At the start of the “Judges’ Homes” round, each judge is assigned one of the new Season Two categories (to be announced) and the 24 acts find out who their mentors are.

What do Justin Bieber, Marc Anthony, will.I.am and Nick Jonas have in common? No, it’s not the outrageous hair spray or the self-indulgent and over-the-top personalities! They’re all mentors on The X-Factor’s last pre-live phase of the competition – the judges’ houses.  The episode is airing tonight on FOX, so don’t be square, just be there!

Celeb Dirty Laundry has been following the competition with our little antennas perked by pure musical pleasure. We’ve had duds (Shawn Armenta), freaks (Shawn Armenta) and crazy people (Shawn Armenta). We’ve seen future superstars (Jillian Jensen), world class vocalists (Diamond White) and group acts made in heaven (Emblem 3). We’ve cried (Jillian Jensen), laughed our faces off (Shawn Armenta) and pointed our grubby little fingers at the judging panel (Simon Cowell). Tonight, it all comes down to this – the most important final auditions of these acts’ lives. They will be put to the test by Britney Spears, Simon Cowell, L.A. Reid and Demi Lovato. Their voices will be thinned out by the nerves and their heart rate will increase ten-fold from the pressure. It is the most important moment of their lives and Celeb Dirty Laundry is there to bring you all of the action and satisfaction.

Which acts make it through to the top 24 phase of the competition. The Boot Camp phase comes to a conclusion, but we’ve already eaten half of our hands in anticipation (we asked our cat to type this). Will it be CeCe Frey or Paige Thomas? Will it be Jillian Jensen? Will it be Reed Deming? Will it be all of them?! The question is, which head will it be? Join us for tonight for an awesome live recap of The X-Factor USA and a remake of the French Revolution. Wipe off those guillotines, smile like a mortician and watch 36 acts lose their heads. Until then, we leave you with these apt lyrics by the Yeah Yeah Yeahs: Off with your head/dance ‘til you’re dead/heads will roll, heads will roll/heads will roll on the floor.

Stay tuned to Celeb Dirty Laundry for a full live recap of tonight’s episode. We will keep you up to date on all X-Factor news, reviews and spoilers and make sure to check back here regularly for more information on your favorite television shows! So don’t forget to come back to this spot at 8PM for our live recap of The X Factor USA Season 2 Episode 9 Judges’ Home Round recap at 8PM EST!

Tonight’s recap:  It’s time for the final boot camp round on The X Factor! Once the 60 acts are cut down to the top 24 they will then move on to the judges’ homes round where they get to work up close and personal with the celebrity judges and mentors. The first ten minutes of the show are devoted to snippets of contenders and moments between judges as they debate everyone’s fate in the competition.

The first category that takes the stage is the young adults. Only six make it through, starting with Cece Frey. Willie Jones, Jennel Garcia, Nick Youngerman, Paige Thomas and Jillian Jensen also make the cut to judges homes.

The over-25 are a talented category and again only six make it through. Jason Brock, Darryl Black, David Correy, Tara Simon, Tate Stevens and Vino Alan move onto the judges’ homes round.  Next up for the moment of truth- the groups. Sister-C, Dope Crisis, and Emblem3 will move on.  The final category is the teens. Beatrice Miller, James Tanner, Carly Rose Sonenclare, Diamond White, Reed Deming and Arin Ray all make it into the top 24.

The judges decide that there is too much talent to lose so they call back 13 people and invite them into the next round because they genuinely care about them.

Now it’s time to find out what category each judge gets. Everyone wants to work with the kids and Britney Spears gets to work with the teens. Simon Cowell gets to mentor the groups. Demi Lovato is working with the young adults. LA Reid has the over 25 group and is none too happy about it. In fact he slammed the phone down.  Everyone is actually happy but poor LA.

Simon quickly introduces his group to their co-mentor, Marc Anthony. The groups freak out upon seeing him, of course. The young adults walk into a futuristic home and tell Demi they were hoping and praying that they got her. They pretty much die when they realize that Nick Jonas is the guest judge.

The teens roll up to the most amazing LA house tucked into the Hollywood Hills and they are thrilled to have Britney mentoring them. Will.I.Am is their guest mentor and I think he actually balances out Britney very well. LA is really not happy with his group and he tells them that flat out, putting a huge damper on their good spirits. The over 25 crew is happy to see Justin Beiber as guest mentor. Justin tells them that they will prove LA’s initial reaction wrong.

The judges are all mentoring six acts but they can only take four with them into the live shows so the competition really starts within these small groups. Jennel Garcia is up first in Demi’s group and she belts out a pretty strong version of I Kissed A Girl. She was a wreck because she just sang and they said nothing. It totally unnerved Jennel after the fact. Willie Jones has no intention of going home and he wants to crank out his best variation of Nobody Knowsbecause he killed it in boot camp and wants redemption. He definitely delivers the performance this time around.

Jillian Jenson is up next. Demi told her to watch her facial expressions when she sings. Jillian sings Gravity Falls and she is far better than the two before her. She totally connects with what she sings. Nick Youngerman is taking on Kesia’s Tik Tok, a pretty bizarre choice that totally works for him. I think he could rap the phone book and it would kind of be entertaining. In Demi’s group the hardcore competition is between Cece Frey and Paige Thomas. Paige does a fabulous acoustic version of Chris Brown’s Turn Up the Music. Demi worries that her insecurities are coming out. I thought she sounded great.

I thought she sounded great.  Cece Frey is last to sing for Demi and Nick. Demi warns her that her attitude can come across as unlikable. Just hearing Demi say that makes Cece cry, because she fears that she doesn’t appear vulnerable enough.  She’s singing I’m Sexy And I Know It but swears it’s meant to be fun. Demi and Nick think she pulled it off AND took direction really well.

Simon Cowell’s group of groups is up next. Emblem3 performs the old Hall and Oates classic Rich Girl and to me they seem a bit too cheery while singing it. Dope Crisis is up next with an acoustic version of Every Little Thing She Does is Magic. They got a bit lost but I did like them better than Emblem3.

Sister C cranks out great harmonies to a typical girl ballad and both Simon and Marc really think they are great. Dope Crisis is a duo that cranks out an awkward performance with even more awkward dance moves. Last up is an all girl group performing Shantelle’s Impossible. This is phenomenal which is why they are showing the whole song and there’s no way these girls will be leaving.

Tune in tomorrow night to see part two of the competition within the judges’ homes!