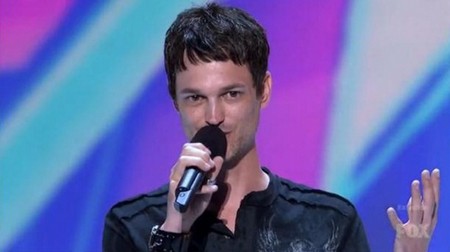 Willie Jones, a 17-year-old contestant from Greensboro, NC, was the first contestant of the night with his rendition of “Your Man” by Josh Turner (fun fact: Scotty McReery – winner of American Idol – did this same song for his audition round during American Idol). Willie did not appear to be a deep-voiced country singer. In fact, Willie resembled a character from Fame and we expected to be bombarded with show tunes and sparkles. Willie’s rendition of “Your Man” was controlled and emotive, with fluent notes near the deep-voiced lower register and a smooth climb to the upper register. Willie’s vocals held some of the most velvety notes we’ve heard in a long time. It was akin to brushing your ears against the finest silk. Willie’s nostalgic performance left the judges reeling as they gave him 4 out of 4. We’re giving Willie 4 out 4 and a badge for “Most Interesting Performance” of the audition rounds.

Julia Bullock (no relation to Sandra Bullock) was the first blonde girl contestant of the night with her rendition of Foster The People’s “Pumped Up Kicks”. Julia did an above average rendition of the catchy pop-infused song, with a strong vibrato near the end notes and an interesting recording voice. Her performance was playful and shiny, interspersed with a white smile to kill the most hardened of critics. The judges gave Julia 4 out of 4. We’re giving her 3 out of 4 for her talented, but subdued performance.

The next performer to take the stage was the 36-year-old Jeffrey Gutt with his rendition of “Hallelujah” by Leonard Cohen. “Hallelujah” has been one of Simon Cowell’s most important songs of his career – Lee Dewyze pushed himself to the win with this song on American Idol and Alexandra Burke’s coronation single for X-Factor UK was Hallelujah, which reached the number one spot during the 2008 UK Christmas period. The song was released to critical acclaim by Leonard Cohen in 1984 and has been covered by Jeff Buckley, Rufus Wainwright, Bon Jovi and k.d. lang. There were rumours during the 2010 season of American Idol (Lee Dewyze) that Simon owned the rights to “Hallelujah”, but this was disproven by Cowell enthusiasts.

The beginning of Jeffrey’s rendition was slanted towards a Rufus Wainwright version, but as the chorus built to a crescendo, Jeffrey forced out stomach churning and brain popping Bon Jovi vocals. The simplistic notes marinated in the deep and guttural gravel of Jeffrey’s crying voice. The performance built to an emotive scream near the finale of the song and for the first time in this season’s X-Factor audition rounds, we were brought to our knees. It is the best version of “Hallelujah” we have ever heard, bar none. The judges gave Jeffrey a teary-eyed 4 out of 4. We don’t even think he deserves to be graded for this performance. He was far beyond the vocal talent of previous audition contestants – this is the type of performance we’d like to hear when we die one day.

There were no other stand-outs of the night, so we just spent our entire betting pool on Willie Jones and Jeffrey Gutt – if we lose, we have to sell potatoes for a living. Let us know in the comments below what you thought of last night’s performances. Would you have given these contestants the same scores?