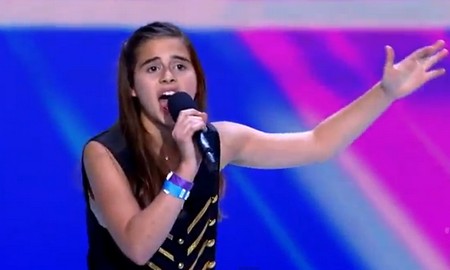 Last night, the second official X-Factor USA live shows aired. The Diva’s Week theme proved too much for most of the contestants, but the handful of standouts delivered unlike they’ve ever delivered before. Celeb Dirty Laundry is once again bringing you a full performance review of last night’s performances. Who did you vote for? Who is your favourite contestant? Who should take home the prize? Did you agree with Jason Brock’s elimination? What difference would he have made during this week of competition?

Jennel Garcia – Mentored by Demi Lovato – Proud Mary by Tina Turner – One does not simply “take on” Tina Turner. It’s the equivalent of becoming a rocket scientist with grade school mathematics. There are distinctive vocal mannerisms and pitch perfection on strong notes that make Tina Turner one of the greatest vocalists of our time. Jennel’s performance, on the other hand, was a second rate Tina Turner supporting act at a Las Vegas hotel. The arrangement was horrid, Jennel’s voice couldn’t handle the quick firing of notes, and the infallible opening verses were rushed to reach the chorus quicker. The judges liked it. We didn’t. OUR SCORE – 5 out of 10.

Tate Stevens – Mentored by L.A. Reid – From This Moment by Shania Twain – We get it, okay? We understand country music didn’t die a horrible death. It’s still alive and kicking. Tate has the potential to be massive in the country arena, really, he does. If one takes a look at last week’s popularity poll, Tate is up there at number one. He has a massive fan base, but his vocals are slightly out of touch with reality. This annoying and boring Shania Twain song somehow seemed to fit Tate’s voice. He will still have to work on his vocal inflections, his pitch, and his lower register. OUR SCORE 6 out of 10.

Diamond White – Mentored by Britney Spears – Halo by Beyonce – Our little Diamond in the rough is back! Taking on Beyonce is a massive feat for any vocalist. Beyonce’s pitch perfect vocals and humungous range usually prove too difficult for any aspiring singer, but Diamond was able to pull it out of the hat. There are still some issues with Diamond’s lower pitch and her tone, but nevertheless, Diamond’s vocal prowess is to be admired. There was a goose bump moment near the end of the song, when Diamond was raised on that platform and the pyrotechnics blasted whiffs of smoke behind her. This is the stuff that legends are made of. OUR SCORE – 8 out of 10.

Beatrice Miller – Mentored by Britney Spears – Time after Time by Cyndi Lauper – There’s something about Beatrice that makes cold chills run up and down our arms. She hasn’t been able to deliver so far in the live performances, but her performance of this seminal hit was excellent. Beatrice might have a bit too much of the singer/songwriter vibe to her, but she’s able to deliver on the emotive qualities of a song, unlike most of the contestants in the competition. There’s not much to fault Beatrice on, except for the monotony of the vocal. Perhaps next time Beatrice could hit a ballad and see where it takes her? OUR SCORE – 7 out of 10

Lyric 145 – Mentored by Simon Cowell – Queen’s We Will Rock You/E.T. by Katy Perry – Look, Lyric 145 is a brilliant, insane group act, but this week they failed to deliver on their brand. It didn’t make an iota of sense. The Katy Perry part might have worked if we were drunken homeless people who never heard music before, and the Queen part was a disjointed and manic rap rendition. Instead of being hardcore, the group came off as a tiny bubble, mere moments before it bursts. OUR SCORE – 4 out of 10

Arin Ray – Mentored by Britney Spears – Crazy for You by Madonna – Okay, what the hell happened to Arin? Last week he bombed the stage, this week he tried to be more “sensitive”, but it came off as schmaltzy, cheesy, and hopeless. Arin’s seemingly pointless channeling of Brian McKnight got stuck in the reincarnation process, because this performance just wasn’t up to the standard we’re so used to on X-Factor. His vocals were near perfect, but he lacked a synced emotion that we’ve grown accustomed to. OUR SCORE – 5 out of 10

Paige Thomas – Mentored by Demi Lovato – Last Dance by Donna Summer – Someone opened the stereotype and let the dog out. We don’t say this often, but desperate times call for desperate measures – this was, by far, the worst performance of this entire season. Words are not able to describe how absolutely horrid and pointless this performance was. Paige went from an endearing Mary J. Blige vibe to a wannabe Rihanna supporting act. Someone should kick Demi in the face and tell her to pull Paige together. OUR SCORE – 1 out of 10

Fifth Harmony – Mentored by Simon Cowell – Hero by Mariah Carey – Just give us a second while we wipe the billion goose bumps from our arms. There’s a reason we’re touting this act as the winner of the competition, and last night once again proved our theory. There were terrible vocal difficulties during the upper register chorus of the song, but if we overlook that, the overall performance was gracious, classy, and emotional. OUR SCORE – 8 out of 10

Carly Rose Sonenclar – Mentored by Britney Spears – My Heart Will Go On by Celine Dion – The mother of all songs, the grandfather of vocals, and the sister of film themes. Carly, oh our darling Carly! How courageous you were to take on this mega hit! No one else in this competition even touches the sphere of Carly Rose Sonenclar. Her vocals weren’t human, her performance wasn’t from this world, and her emotions were far, far beyond her years. Carly was the first vocalist in X-Factor’s history to bring me to tears – and I don’t cry easily. OUR SCORE – 10 out of 10.

Vino Alan – Mentored by L.A. Reid – Let’s Stay Together by Tina Turner – Vino had the post-Carly death slot. This was a slow and pointless attempt at great vocals. Unfortunately, Vino’s voice doesn’t always click into a song like it should, and this was one of those moments. We struggle to understand how Vino isn’t able to break loose from the orthodox box and blow us away with a spectacular performance. Boredom set in after the first verse. OUR SCORE – 5 out of 10.

Emblem 3 – Mentored by Simon Cowell – No One by Alicia Keys – The biggest struggle for Emblem 3 will be trying to keep up with the other contestants during the theme shows. This was an above average vocal and a below average performance. We still like Emblem 3, because they’re fresh, different, and they bring a brand new feel to the show. Unfortunately, this performance languished in desperation for much too long. OUR SCORE – 6 out of 10

CeCe Frey – Mentored by Demi Lovato – All By Myself by Eric Carmen – This is, by far, one of the greatest songs ever written. It is my personal favourite song of all time. However, the irking CeCe did a suicide rendition of Eric Carmen’s seminal hit. Her performance was heavy handed, her vocals were completely missing the pitch, and she lost her mind halfway through the chorus. We think this might be the end of the road for CeCe. OUR SCORE – 4 out of 10.

Didn’t agree with our scores? Think we got it wrong? Let us know your thoughts in the comments below. Remember to bookmark Celeb Dirty Laundry for all of your X-Factor news, reviews, spoilers and recaps. Tune in tomorrow night to Celeb Dirty Laundry for a full recap of the elimination show, where that other horror called Taylor Swift will take the stage.