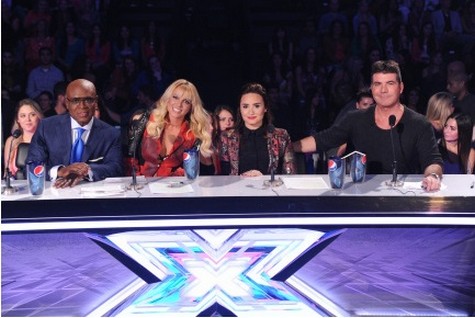 Tonight on Fox THE X FACTOR USA returns with a whole new episode. On tonight’s show the Top 12 perform for diva inspired songs for Divas Week.  Simon said about tonight’s show “The theme next week is divas, I expect brilliance from everyone, one proved tonight how this show can change your life. Use it!”

On last week’s show it was not quite the surprise we were hoping for. It was the theatrical and salacious Jason Brock versus the annoying and somewhat disliked CeCe Frey. The judges’ votes went two/two each (Demi Lovato voted Jason, L.A. Reid voted CeCe, Simon Cowell voted Jason, and Britney Spears voted CeCe). The deadlocked vote was down to the public, so democracy reared her head and sent Jason home. According to Jason, “I did it for the gays and Japan.”  If you missed the show you can read our full and detailed recap here!

On tonight’s show the remaining 12 contestants will perform their Divas Week songs.  On the results show tomorrow Taylor Swift is going to provide the guest talent and sing “State of Grace,” from her blockbuster new album, “Red.”   Then we will find out who America votes out.

Stay tuned to Celeb Dirty Laundry for a full live recap of tonight’s episode. We will keep you up to date on all X-Factor news, reviews and spoilers and make sure to check back here regularly for more information on your favorite television shows! So don’t forget to come back to this spot at 8:00 PM for our live recap of The X Factor USA to see the  Top 12 perform their Diva Inspired Songs – recap at 8:00 PM EST!

Tonight’s episode should be pretty good because we are saluting music from divas and two of the competitors will be eliminated based on their performance tonight. Taking the stage first this evening is Jennel Garcia doing her best to crank out Tina Turner’s Proud Mary.  LA Reid thinks she started the competition off with a bang. Britney Spears tells her that Tina would be proud and Simon Cowell tells her she is back in the competition. The audience seemed to really love it which puts me in the minority because I wasn’t digging this much at all.

Tate Stevens is singing Shania Twain’s From This Moment. To say the place went nuts is an understatement. Britney points out that the performance was incredibly heartfelt, Demi Lovato can’t believe how good he is and Simon is ready to write him a 5 million dollar check now.  I still say Tate is going to win this thing.

Diamond White seems perfectly suited for divas week. Britney Spears is her mentor and she choose Beyonce’s Halo for Diamond to sing. LA thought she picked tough shoes to fill and did it. Demi thinks she’s a diva in the best way possible. Simon thinks she’s a future star.

Beatrice Miller seems to be carrying the weight of her entire family on her head. Neither of her moms has a job and she sees her singing as the way to save the family. She does an amazing rendition of Cyndi Lauper’s Time After Time. I seriously have chills. LA thinks it wasn’t the best song choice. Demi loved the song choice because it showed a different side of her. Simon thought it was a bit boring but much better than last week. Britney fires back at Simon saying Beatrice has more talent in her pinky than he has in his whole body.

Lyric 145 is tackling a Katy Perry/Queen mashup.  I wouldn’t have thought of combining We Will Rock You and ET but man does it work. I love what Simon is doing as this groups mentor.  LA thinks it’s better than last week but he thinks they have lost their way. Britney thinks they should be doing straight hip hop and Demi just didn’t get it.

Arin Ray gets to tackle Madonna’s Crazy For You. He thinks he can channel the emotion because he has someone in mind that he can sing it to. He puts a real R&B spin on this song and it works. The girls in the audience are nuts but both LA and Demi were bored by it. Simon thinks Arin looked like he hated it as much as everyone else.

Fifth Harmony is filled with divas so it makes sense that the group would take on Mariah Carey’s Hero. They picked a tough song but LA thinks somewhere in the middle it turned into a great song. Britney and Demi think Simon is doing a great job with this group. If a group is going to win I’d bet on these girls.

Carly Rose Sonenclar gets to do the inevitable- perform Celine Dion’s My Heart Will Go On. LA thinks Carly could be the winner. Demi still can’t believe that Carly is as good as she is. Simon also can’t believe she is human because no 13 year old can sing that song the way that she just did.  Absolutely amazing.

Vino Alan is cranking out Tina Turner’s Let’s Stay Together and I think LA chose a good song for him. Vino is not my favorite here but I’m definitely jammin’ with him and kinda want more than two minutes of this song. Britney loves his soulful voice. Demi liked it but still says she was bored. Simon says that Vino’s voice is designed for those special moments and this song didn’t offer any of those.

Emblem3 are performing Alicia Keys No One and I’m not too sure about this concept.  LA thinks they are superstars with a perfect vocal blend. Britney and Demi both understand why the girls swoon over them. I do too. They are adorable and still humble (for now).

CeCe Frey is up next and is it horrible that I kinda hope she goes home even before she starts to sing? She was in last place last week and her rendition of All By Myself is more than a little rough. I don’t get it. The girl that went through the audition process I liked, this chick, not so much. LA thinks she sang really well but it still wasn’t enough to stick around. Britney doesn’t get CeCe at all. Simon likes her but thinks the song was very gimmicky and cabaret-ish. The judges all agree that she is just not working out.

That’s it, all 12 have performed. Tune in tomorrow night to see which two contestants get the boot.