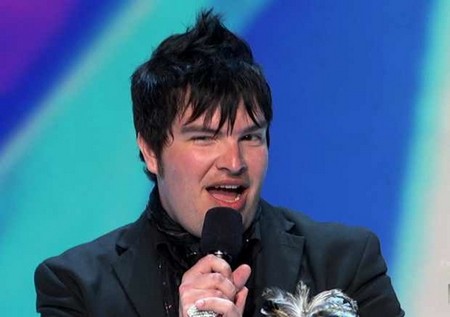 Last night’s X-Factor elimination show wasn’t quite the surprise we were hoping for. It was the theatrical and salacious Jason Brock versus the annoying and somewhat disliked CeCe Frey. The judges’ votes went two/two each (Demi Lovato voted Jason, L.A. Reid voted CeCe, Simon Cowell voted Jason, and Britney Spears voted CeCe). The deadlocked vote was down to the public, so democracy reared her head and sent Jason home. According to Jason, “I did it for the gays and Japan.”

Were the votes fair? Was Jason supposed to be the one to go home? Well, we have a theory of our own. Jason’s voice has been a spectacular force to be reckoned with throughout the competition, but his Las Vegas theatricality and musical theatre numbers have caused many members of his voting bloc to look for greener pastures. You have to understand, The X-Factor contestants enter the live shows with a set voting bloc – fans who grew to love the contestant during the first few rounds – but as soon as these contestants falls apart on stage and lose his/her appeal, the “undecided” members of the voting bloc immediately lock on to their second favourite contestant.

We doubt Jason’s theatricality went down well with the majority of USA, so his elimination from the show came as no massive OMG surprise. CeCe Frey, on the other hand, has been polarizing throughout the competition. Many fans of the show have disliked her from the get-go, but she’s been able to hold on to her spot in the competition due to the safety net of the judges. We do, however, highly doubt that CeCe will survive for much longer on the show.

Last night was also the first time in a reality television talent show’s history that all of the contestants were ranked according to public popularity. This created an unheard of dynamic that gave us an opportunity to see who the front runners in the competition were, but was this a wise decision by the producers? Not necessarily so. Instead of having created a competitive dynamic, we’re afraid that this ranking list might cause acts to be sent home prematurely based on popularity, not performance quality. Alas, the ranking list was an interesting little gimmick during last night’s elimination. This is how the popular cookie crumbled: