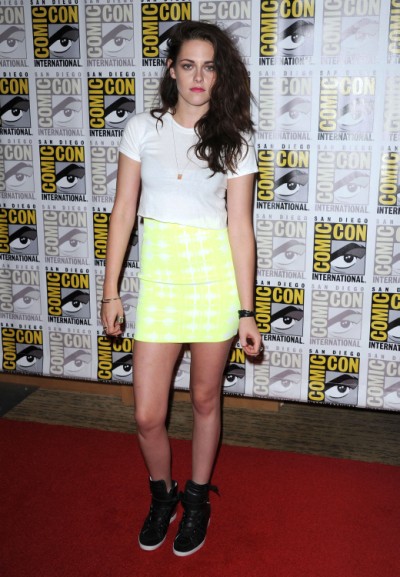 Kristen Stewart debuted a sexier, curvier look at Comic-Con this past weekend leading some to believe that the actress might have enlisted the help of a plastic surgeon or Victoria’s Secret. Boob job rumors are running rampant for the Twilight star who’s made waves more for her gritty acting skills than her buxom bosom. But wearing a black bra under a tight white T-shirt… it’s almost like Kristen was trying to spell it out for everyone.

“Her breasts have gone from what looked like a large A cup to a large B cup,” New York City-based plastic surgeon, Dr. Matthew Schulman, told Star magazine. “While this might be the result of a new, state-of-the-art bra, it’s most likely the result of a breast augmentation.”

Et tu, Kristen? On behalf of proud, small chested women around the world I have to ask, WHY? But before I freak out, I’m not too sure those are implants. Granted, I’m not an expert like my husband thinks he is but Kristen’s enhanced chest could just be the work of some heavy duty underwiring. She wears black sneakers on a red carpet for crying out loud. She can’t possibly care about her boob size! But another doctor interviewed by Star tends to disagree with my theory. Michigan-based plastic surgeon, Dr. Anthony Youn, agrees with Dr. Schulman and thinks the implants fit Kristen’s frame. Very Goldilocks of her, not too big, not too small.

Maybe Kristen’s just trying to relate to Bella Swan and come into her sexier, more feminine own. Or maybe she’s thinking this new vixen look will get her to the front of the Fifty Shades of Grey Anastasia Steele casting couch? I’m not sure. But I like Kristen Stewart. I think she’s a smart, talented actress that is hungry to make a name for herself in Hollywood outside of Twilight. I can’t imagine a boob job was her answer. Can you? Take a look at the photos and tell me what you think. Real or fake?