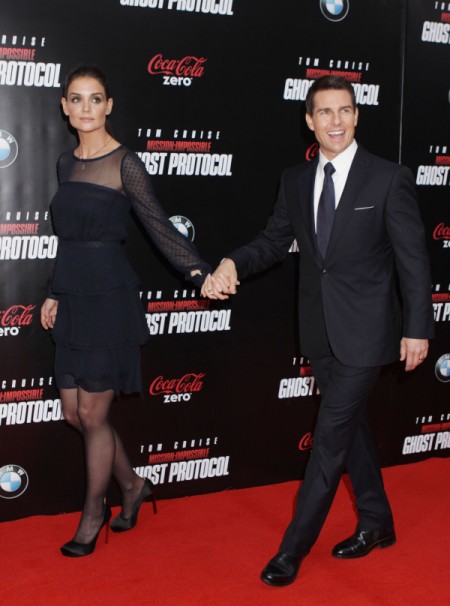 Photo agencies have pics of Katie Holmes’s NYC apartment and say private investigators, allegedly hired by Tom Cruise, are constantly there keeping tabs on her. In fact, the constant supervision forced Katie’s security team to buy camera gear to keep track of the investigators. They have been hiding out in Escalades and a Mercedes SUV.

CREEPY! Who does that? I’ll tell you who – Scientology nut-jobs, that’s who!

Many of us are still reeling from the Katie Holmes and Tom Cruise divorce news but sources close to the couple are creeping out and revealing just how troubled the A-list relationship has been for a long time. Being monitored is nothing new to Katie.

Tom’s living quarters were on one side of a large communal area while Katie lived on the other side of their home in the Scientology ­Celebrity Centre, a massive hotel-style complex devoted to the controversial religion.

A source who visited them there said: “It was really weird in all respects. There were men in suits on all the doors of the complex and they would often escort you up to the apartment in an elevator keeping an eye on you. It was quite unnerving.

“Tom and Katie had a lot of people coming to see them there, to cut their hair and cook for them and stuff.

“Everyone knew they stayed in ­separate sections of the apartment but nobody mentioned it.

“Katie was really embarrassed about it, and didn’t seem to like people to see the way they were living behind closed doors. But she just got on with it and knew there was ­nothing she could do about it.”

In addition, Tom controlled everything about Katie. The newspaper revealed that Tom told her when she could visit her parents, what movie roles she could take, and started calling her Kate when she’d always been known as Katie. I always thought the Kate vs. Katie thing was weird. He started doing that right when they got together and it always sounded so forced, kind of like how everyone calls Kate Middleton Catherine now.

Divorce is bad enough, but my heart bleeds for this girl. Should she have known better? I guess, but she was young and infatuated when they got together, and despite what you think of Tom, he is a good actor. I just hope she can withstand the crazy and keep fighting for her daughter. RadarOnline reports that Tom is going to file for divorce and joint custody in California because he has a better chance of getting it in that state. He’s going to be ruthless. I hope he doesn’t have anything to hold over her. I want her to get out with that kid in tact! Do you think she has a chance or is Tom too powerful?