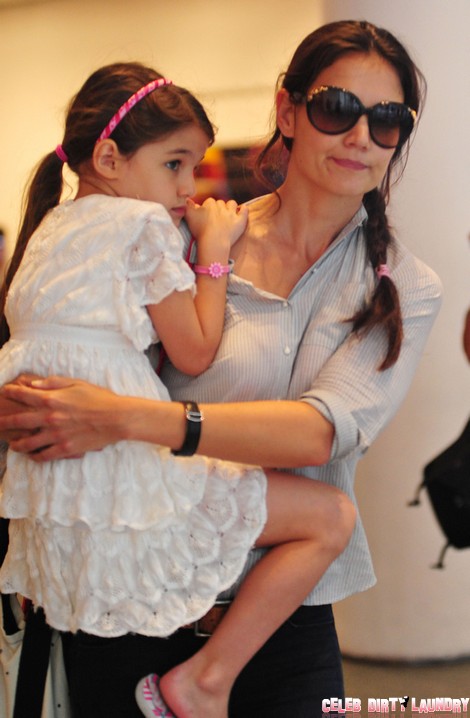 We always knew Tom Cruise was the creepiest man in history (along with Napoleon and Stalin), so it comes as no surprise that Tom has been keeping tabs on Katie Holmes, via Suri Cruise (Siri for the Iphone?).

According to Life and Style magazine, even though Tom and Katie are in the midst of a horribly sad divorce, he still manages to keep track of Katie’s schedule through phone conversations he arranges with Suri. Has Tom reached an absolutely new level of insanity? Is this the moment the world will see Tom lose his façade and turn into that kid from The Shining?

We all remember the psycho revelations by ex-Scientologist Marty Rathbun, who was the Inspector General of the Scientology Church. He discussed several times in the media how the “religion” is actually a place for ego trips and Disneyworld fantasies. David Miscavige, the head of Scientology and Cruise’s best friend, is absolutely and completely insane, because one of the requirements for becoming a Scientologist is to have been certified mentally unstable by a psychiatrist in hell.

Katie isn’t stupid, at all, because as was reported right here on Celeb Dirty Laundry, the doe-eyed lunatic is about one point away from being declared mentally unstable, but Tom stalking her has evolved into a completely new and utterly fascinating plot. Firstly, where does he find the time in between snuggling up to insane people and eating fluffy slippers? Secondly, isn’t Tom a bit too old to be playing Peeping Tom? Dude, we did that once in high school with the girls from the Academy of Lady Tears and we ended up crying under the bleachers – no-one told us these girls were wrestlers trained in Russia.

Katie, we would head for the nearest isolated hotel and hide there until he breaks down the door with an axe and screams, “Here’s Tommy!” The terror of a haunted hotel is much more pleasant than being stalked by a Scientologist.

Let us know in the comments below if you also think Tom Cruise is a creepy little man with too many issues.