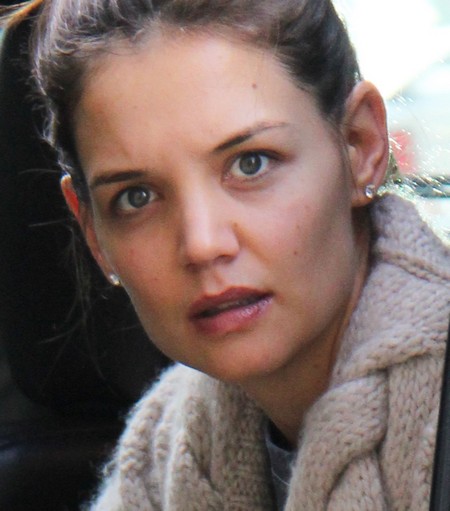 The plot thickens in the Katie Holmes versus Tom Cruise divorce case as we learn that Katie fired Tom’s daughter, Isabella Cruise, ‘out of the blue,‘ two months before she filed for divorce. As more evidence comes in we see that Katie planned the entire divorce well in advance – and we believe she plans to use it to her advantage as a vehicle to greater stardom. In other words – we have good reason to believe that Katie Holmes is a famewhore.

When Katie filed for divorce and sole custody of Suri Cruise at the end of June, her team immediately went into attack mode.  Team Katie’s minions were in fine form as they reported and leaked to major entertainment blogs that Katie was desperate to save Suri from horrid Church of Scientology ‘boot camps’ and psychologically brutal testing.  Furthermore, Team Katie helped disseminate the message that Tom and Scientology were ‘spying’ and ‘plotting’ against her – this was accompanied by plenty of stories about Katie’s ‘tortured’ life under the draconian rule of ‘fanatical controlling’ Tom.

Note that all of the above accusations by Team Katie – at least in terms of Katie and Suri’s actual experience – were presented without a shred of evidence – and yet their propaganda was lapped up by the eager media and gullible public.  But if we look more closely we can see that Katie is not the innocent and injured party she claims to be despite her media campaign to the contrary.

According to a source, poor Isabella, 19, was fired suddenly and without warning from her job at the ‘Holmes and Yang’ clothing firm.  Insiders have explained that this cruel unprovoked dismissal of her step-daughter was all part of Katie’s strategy leading up to her divorce filing.

The source said: “There was never any trouble between them. Bella called Katie ‘Mom’. She was fired out of the blue, and once Katie filed for divorce, it all made sense. This was a carefully planned ambush. Katie didn’t want Bella working for her anymore because she was Tom’s kid.“

Yes, heartless Katie is taking no prisoners on her road to glory – ridding herself of Tom and simultaneously boosting her own career to a thoroughly undeserved new high.  Katie Holmes is behaving like an extremely calculating and cold-hearted famewhore – to me she is making Kim Kardashian look good.  At least Kim hasn’t yet used a young child in her climb to stardom.

Do you agree with me that Katie knew what she was getting into with Tom when she agreed to marry within 7 months of having his child? Do you think that Katie has plans to use the divorce as her stairway to the A-list?  Tell us whom you favor in this bitter struggle – Katie or Tom – or do they both disgust you?