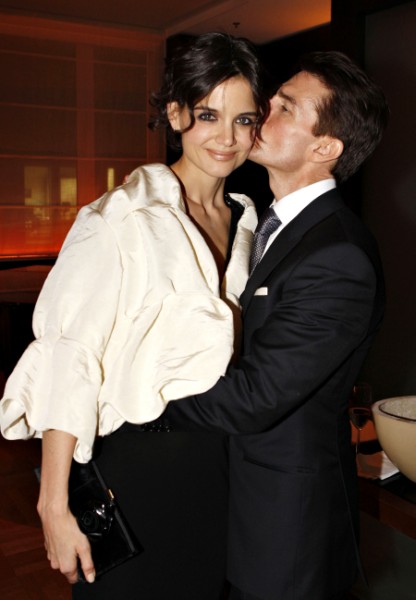 In the never-ending saga that is the rapid descent of Tom Cruise into a dark abyss, I’m happy to bring you the next chapter, in which Tom finds his lawyers working against a new lawsuit that threatens to cost him his fortune and his daughter, Suri Cruise. No one thought this guy was up for Father of the Year or anything (even though he gets her for Christmas, buying presents doesn’t make you a parent!), but the allegations put forth certainly paint a different picture!

Slim Shady Holmes filed a lawsuit this July, under the Whistleblower Protection Act (which protects tattle tellers from workplace discrimination), which alleges that Suri Cruise, who has been living with mom Katie Holmes in NYC since the divorce, is being brainwashed and indoctrinated by dad Tom. Slim Shady Holmes claims to have witnessed Tom “dancing in his underwear with John Travolta.” The whistle blower also claims that Tom will “impregnate the Octo-mom” and “indoctrinate Suri Cruise with repeats of Dawson Creek.”

If you haven’t noticed how absurd this is, please do so now. The accuser also claims that “Tom Cruise pretended he was the last samurai, attacked me, killer clowns from outer space, and the milky way candy bar company, and mr. goodbar was a witness.” Whoever wrote this is clearly insane, and the document is filled with spelling errors. What’s most unbelievable is that the man is asking for a $34 million settlement in damages, and wants custody of Suri!

You’ll probably never hear me defend Tom Cruise ever again, but I kind of feel bad for the guy. He’s a victim (albeit one with $300 million in the bank) of some sick jerk who is not only insane, but quite possibly dangerous and obsessive. I don’t know if this sort of stuff is sent to his legal team often, but you can’t read the above and not feel a tiny bit of sympathy! Loony Slim Shady Holmes mailed the document from a Korean barbecue in NYC, which means he is in the same city as Suri. I know mom Katie is very careful about having security around, and I hope she’ll up it!

The document also made allegations concerning his ex-wife Katie Holmes, Matt Damon, Jeff Gordon, George Zimmerman, Victoria Beckham, Keith Urban, Jackie Chan, and deceased Saddam Hussein. If any court proceedings come out of this, I hope it’s to institutionalize Slim Shady Holmes (if that is his real name! Which it isn’t, unless he is extra deranged and did all the paperwork for a name change!). Tom is a little too lawsuit happy if you ask me, what with suing Bauer Publishing magazines like In Touch and Life and Style after some stories about his relationship with Suri (defensive lawsuits don’t make you a good dad, either!), but I think this one is so obviously BS it should be burned up immediately! What do you think? Does Tom deserve little annoyances like these?