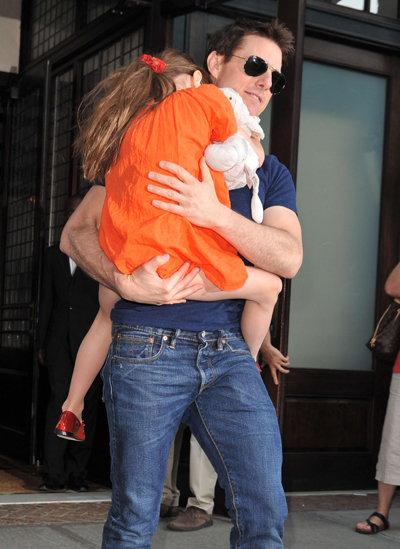 If Katie Holmes really wants to protect Suri Cruise from the insanity of being the child of two high-profile celebrities who recently divorced, then she needs to get her out of NYC, pronto!

Just days after Katie and Suri’s limo was hit by a garbage truck, the 6-year-old and her dad, Tom Cruise, were chased through the streets of Manhattan by paparazzi in what the Huffington Post describes as a “high-speed car chase.”

Reportedly, after leaving their hotel, Suri and Tom took a black SUV to a heliport and were chased the entire way there by photographers, doing a speed of 55-65 mph on the West Side Highway, where the speed limit is only 25 mph.

And while no one was reportedly hurt by the chase, it does give us chilly flashbacks of Princess Diana‘s death. Related: Tom Cruise Outraged As Suri Paternity Questions Arise

Katie has reportedly enrolled Suri at a New York preschool for the fall, which means that they will be sticking around the city at least for another year, but if the media attention continues the way that it has, it’s not safe for Suri, not to mention all of the everyday people around her, to live in NYC.