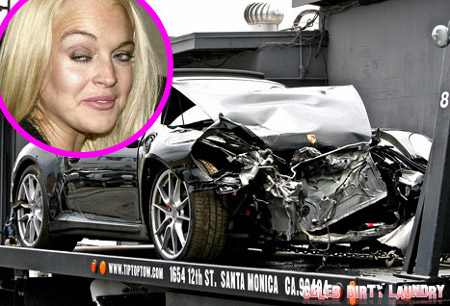 The truck driver who was involved in the hot mess of a wreck yesterday in Los Angeles is now insisting Lindsay Lohan bribed him to lie about what really happened in yesterday’s car crash!  The story just gets juicier and juicier!

According to TMZ, the truck driver, known only as ‘James’ has come forward claiming the troubled actress tried to offer him money to keep his silence as to the details of the crash — because, apparently, he says Lilo tried to leave the scene!  Yesterday, Lindsay was driving her Porsche on the PCH highway when she collided into the rear end of James’ semi-truck.  A Cadillac Escalade driven by someone who knew Lindsay was behind her, and apparently after the accident when Lindsay tried to leave the scene, her people tried to offer him cash to keep quiet.  James said after he called 911, the driver of the Escalade offered to “go to the bank” to withdraw some cash.

What is this, a drug deal gone wrong?  Sure sounds like it.  Lindsay’s assistant, who had been with her in the car, along with the mysterious Escalade driver approached him informing him of Lindsay’s star status.

“Him and the guy took me across the street and told me this was some kind of famous person and they didn’t want to be in the media. But I’d already called 911 because they were trying to get away from the scene. But they packed a bag and then the limousine driver told me, ‘Don’t mention the bag to the cops.'”

Interesting . . . very interesting.  According to Lindsay rep, Steve Honig, the star is cooperating fully.  And thankfully, no one seems to be seriously injured, which at the end of the day is the most important thing. Still . . . I wonder if there will be a blood/alcohol level check?  Now that will make for some juicy stuff . . . .