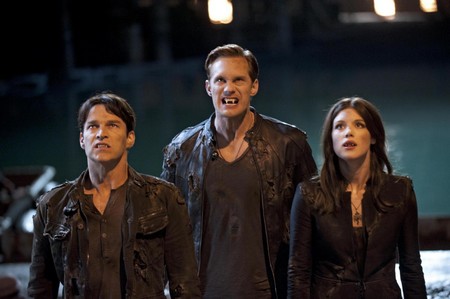 Tonight’s the night we have been waiting for, the season 5 premiere of True Blood.  Get your fangs ready, your mug of true blood and hold onto your seats it is going to be a super intense ride this season.

With some major new villains (or at least some new vamps who are going to be a challenge) heading our way and some old familiar faces eager to sink their fangs back into the neck of Bon Temps residents, everyone here is getting pumped.

Last season ended with a cliffhanger so, needless to say, fans will be eager to settle back into their TruB routine and find out what happened to  Tara who apparently died at the end of the season and their other favorite characters.

On tonight’s show as the dust settles in Bon Temps, Sam and Luna’s plans for a fresh start are interrupted by a new arrival, hell-bent on revenge.   Meanwhile: Sookie’s vow for a life without vampires is put to the test; Lafayette struggles with his latest acquisition; Patrick calls in a favor from Terry, that will put his relationship with Arlene under pressure.

Jessica takes a backseat, while Jason caters for an unwelcome house guest; Pam tries to make amends, and Bill and Eric plan their escape from the forces now pursuing them, but are soon drawn into a plot that will shatter the very foundations of the vampire hierarchy, and bring them face to face with their deadliest enemy.

So tune in to Celeb Dirty Laundry tonight at 9PM for all the fangtastic happenings on the Season 5 premiere of True Blood.  Make sure to refresh often to get the most up-to-date news!  While you wait for the recap go her for some spoilers of tonight’s episode!

Tonight’s recap: Tonight’s episode opens up with Bill calling Jessica and telling her he is going away for business. He also tells her while he is away his palaces is her palace, within reason.

In Sookie’s kitchen she hears someone at the door and turns around and it is Debbie. Bill feels Sookie in danger and he says Sookie and Eric says F*?! Sookie, she does not want them.

Tara steps in front of the gun Debbie has and she gets shot. She has killed Tara. Pam comes in and she is looking for Eric, she tells Sookie to tell Eric she is sorry. Lafayette asks Pam to turn Tara into a vampire.

Pam asks why she should do it and Sookie says she will owe her one.  The vampire Authority shows up and they take Eric and Bill. They silver them and put them in the trunk of car.

Rev. Steve shows up at Jason’s house and he opens the door naked.  He promises Jason he is just there to talk to him but Jason tells him he has seen his fangs.  Jason refuses to look at him because he is afraid he will glamour him.

Rev. Steve tells Jason he was turned as a punishment and he does not even know his maker.

Jason looks at Rev. Steve and he glamours him.  He tells Jason to invite him in.  Jason complies and invites him in.

Sam sees a pack of wolfs and they want to know where their pack leader Marcus  is – last time they heard from him he was with Sam and Alcide.  Sam shape shifts and turns into a bird and flies a way.

Lafayette and Sookie have dug a grave for Tara.  Pam goes in the grave with Tara and asks Sookie to bury them.

Luna and shows up at Sam’s house.  Sam tells Luna should pack and leave because the pack is coming after him.  Luna asks why, Sam did not kill Marcus, Alcide did.  Sam tells Luna he will not betray Alcide.  A wolf shows up and she wants to know who killed Marcus.  She tells Luna if she does not tell they will hurt her daughter.  Sam lies and says he killed Marcus and he goes with the pack.

Rev. Steve has glamoured Jason and puts tape over his mouth and tells Jason he will forget everything except the fact that he invited Rev. Steve into his house.

Rev. Steve tells Jason he is upset that Jason slept with his wife Sarah. What is upset about is that she got to sleep but Jason.  He admits to Jason he is a gay vampire.

She drops her cape and she is in a bustier and she jumps on Jason and starts kissing Jason and making out with him.

Meanwhile, Bill and Eric are trying to get out of the trunk of the car.  They managed to poke a hole in the fuel line and the car explodes.  Bill is hurt and he tells Eric to run, but Eric tells him he is not leaving him there.

A woman comes and saves them and her name is Nora and it seems Eric knows her.  They start to make out and Eric tells Bill it is his sister.

It seems Nora is part of the Vampire Authority and no one knows she is Eric’s sister.

She brings Eric and Bill to a container to protect them.  Nora calls the Authority and tells them that Eric and Bill have escaped.

Nora tells them the life they knew is gone forever and they must leave.  She tells them if they return they will face the true death.

Lafayette and Sookie head back to the house to move Jesus.  When they get there he is gone.  Lafayette asks her to leave he wants to say goodbye to Jesus.

Holly’s boys come back from their hunting trip and find Andy naked in bed with their mother.  Holly introduces the boys to Andy.

Patrick, Arlene and Terry and Arlene’s children are eating and they are trying to find out info about Terry from Patrick.   Terry makes it clear he does not want Patrick to say a thing.

Sookie gets a knock on the door and it is Alcide, he tells Sookie they have to talk.  Alcide tells Sookie that Russell Edgington is on the loose.  Alcide asks if they told her?  Sookie replies, ‘Told me What?’

Lafayette tells Sookie the sun is going down and they should be there for Tara when she wakes up. Sookie get some True blood.

Over at the wolf pack they are beating the crap out of Sam.  Martha comes in to talk to Sam (Martha is Marcus’ mother) – she tells him that when the pack master dies there are things they have to do to honor him.  The pack needs Marcus’ body back.  She promises Sam if they get Marcus’ body back they won’t hurt Luna or her daughter.

Eric and Nora are having noisy sex and Bill tells them to quiet down.  Eric’s phone rings and Nora asks how he could be so stupid.  Eric claims his phone is untraceable.

He picks up the phone and it is Alcide and Eric looks upset.

Jessica is having a party at Bill’s house with a bunch of kids and they tell her she is the coolest vampire ever.  The doorbell rings and it is Jason and he sees she is having a party.  He walks in and tells Jessica he is off-duty.  He offers to take his uniform off much to the pleasure of the girls at the party.  Jessica is not pleased to have Jason there.

Patrick goes outside to speak to Terry.  Patrick tells Terry that his house was burned and 2 other members of their troupe died in a fire.

Terry tells Patrick their house burned because of a ghost called Mavis – Patrick mentions it is because of what happened in Iran.

Patrick tells Terry that he thought he was the one setting the fires, but Patrick realized he was not.  He asks Terry to help him find who is doing it, Terry refuses and Patrick is not happy.

The party at Bill’s house is really heating up and Jason sees Jessica making out with another guy – so he grabs a girl to make out with.

Jason takes the girl to his police car – she offers to take him to her sorority house.  Jason tells her he is just going to take her home – he does not want to have sex with her.

Sam leads the pack to Marcus body and they are going to kill him.  Alcide and Luna show up and he tells the pack that Sam did not kill Marcus.  Alcide admits he did.

Marcus’ mother turns into a wolf and starts to eat her dead son Marcus’ inners.  It looks like the other members of the pack are going to do the same – YUCK!  One of the pack members tells Alcide they will not follow him.

Laura, Bill and Eric head to the water to meet the group who will gives them new papers and a new life  – they are leaving.  Eric says goodbye to his sister Nora.  All of a sudden the people helping them are getting shot and the Vampire Authority shows up.

All of a sudden there is a burst of dirt and Tara is standing in front of Tara and it appears she is attacking her. Sookie screams ‘Lafayette.’

What do you think, was the episode everything you hoped for?  Hit the comments and let us know.