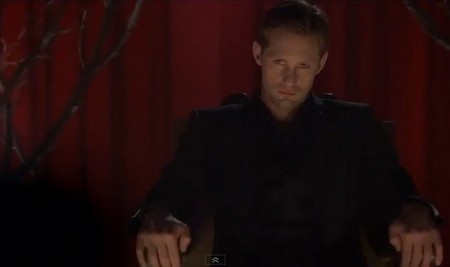 Tonight was the third episode of season 5 of True Blood and we got to learn more about one of the chancellors’ Salome. We also had a brief glimpse of someone who Jessica said – blood smelled like cotton candy and sex. We have a sneak peek video and some spoilers to wet your appetite for next week’s episode 4 “We’ll Meet Again.”

On tonight’s True Blood episode Bill and Eric bartered for their lives with the Authority Chancellors and their leader, Roman. Salome and Roman enlisted a new ally in the face of Russell’s return and a surprising ally it was, Rev Steve Newlin.  Andy’s dalliance with Holly comes back to bite him in the butt; laterh, he’s visited by Gordon and Barbara Pelt, who are searching for Debbie. Jason bumps into an old high school teacher, but their reunion brings up conflicting feelings.  Jason decides he does not want to be just about the sex anymore.  If you missed tonight’s episode you can read our full and detailed recap here.

Spoiler alert: If you’re one of those people who doesn’t like spoilers, stop reading now! We have some juicy spoilers for you about the season 5 episode 4 of HBO’s “True Blood”.

Official HBO synopsis of next week’s episode: “Eric and Bill have doubts they will survive the search for Russell. Sookie opens up to Alcide. An irate Lafayette unwittingly puts Sookie’s life in danger. At Authority headquarters, Roman and Salome continue interrogating Nora about the Sanguinistas – and a possible traitor within the Council. Pam forces Tara to toe the line; Andy and Jason go to a burlesque party; Sam’s shifter friends invite him for a run; Terry flashes back to a deadly night in Iraq; Hoyt tests the fangbanger waters; Sookie drowns her sorrows.”

Sookie tells Lafayette the only way they crawl out of the hole they are in is to start doing right.  She is fed up with lying and cheating and ruining people’s lives. Alcide comes to see Sookie and tells her he went to the Pelts and he told them about Debbie.  I doubt he told them the real truth. 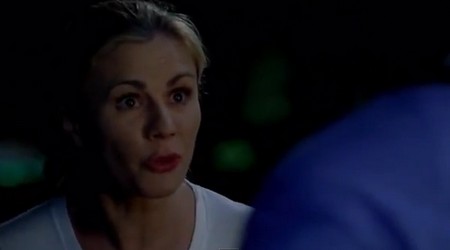 Meanwhile Bill and Eric are trying to figure out who released Russell from his cement grave.  They don’t have many suspects on who could have broken Russell out, since only four of them knew where Russell was.  Bill tells Eric that Sookie could probably be useful and Eric tells Bill that Sookie does not want anything to do with them, but Bill says they will not give Sookie a choice. YIKES! 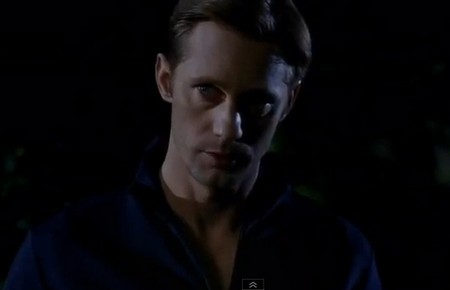 Meanwhile the Vampire Authority are still questioning Nora and trying to find out who is gathering the extremists to bring them down.  It also looks like Nora may be facing the True Death this week.  Roman also suspects that there is another traitor in their midst and wants to know who it is.