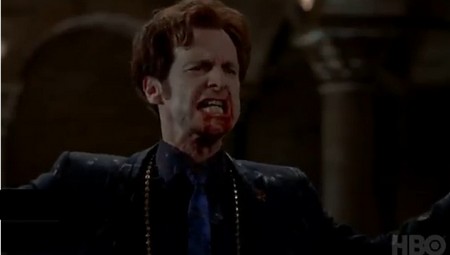 Tonight was the seventh episode of True Blood season 5 and it was another great episode, the season is really heating up! We have a sneak peek video and some spoilers to wet your appetite for next week’s episode 8 ‘Somebody that I use to know’ episode!

Tonight’s show was fast paced so much happened!  Russell is back with a vengeance and we found out that it was Salome who released him from the cement.  Russell is now loyal to Lilith but Salome is redefining what Lilith wanted vampires to do.  Salome has a ceremony and makes all the members of the vampire authority including Bill and Eric drink Lilith’s blood.  It causes them to go into kind of a LSD fugue where they devoured a bar full of patrons.

Meanwhile Alcide prepared for the pack-master fight.  He knows he has to be really strong because JD is on V.  Martha finally believes Alcide about JD because she overhears JD offer her granddaughter Emma V.   If you missed tonight’s episode it was a great one,  you can read a full and detailed recap here!

Spoiler alert: If you’re one of those people who doesn’t like spoilers, stop reading now!  We have some juicy spoilers for you about the season 5 episode 8 of HBO’s “True Blood”.

Next week’s show will be Stephen Moyer‘s directorial debut and he said  it was “fun” directing his fellow castmates, although his wife said he was bossy!

Eric gets back to the vampire diary headquarters and he hears Salome and Nora discussing last night’s events and Nora is saying how it was a sign and they are on the right path. (Eating many humans – actually eating every person in a bar the whole council went to)  Eric says, “I think I had enough fun for one night!” and walks up to Bill and asks him if he is coming. 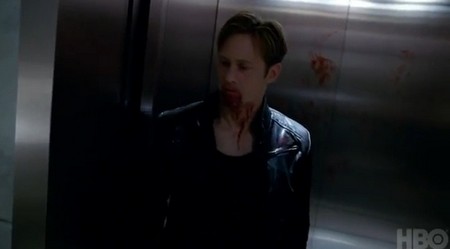 Sookie tells Jason she it tired of hearing voices, she is tired of being chased by vampires and she is tired of being a freak.  Jason looks shocked.  He saw the bolts of light in the sky and he realizes that Sookie is trying to get rid of all her faerie powers.  She was told because she is 1/2 fae if she uses them too much she will lose them and become human. 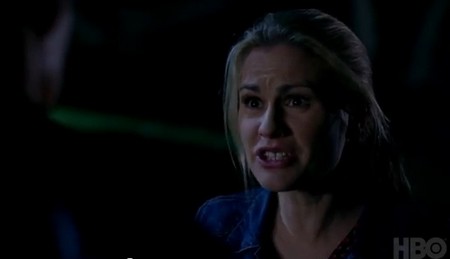 On tonight’s show Godric came to Eric and reminds him that what he is doing is wrong (eating humans)  Eric comes up to Bill and asks him what he is doing and his fangs come out and it seems he bites someone.  In another scene we see Eric in the vampire authority chamber and he grabs someone by the neck.  It is either Nora or Salome.  I am guessing it is Nora, because Godric asked Eric to save her. 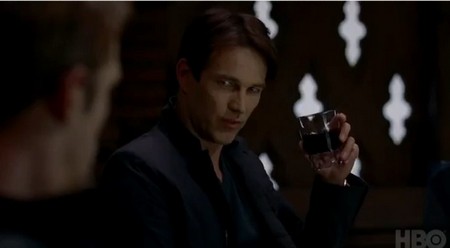 Now that Jason knows vampires killed his parents he is intent on finding the vampire that did it and making him pay for what he did.  Alcide and JD get ready to fight.  Alcide tells JD he is a drug addict and a disgrace to all wolfs.  It looks like Joe Bob and his band of sup haters have Jessica all tied up and she is in serious need of help.

We get the usual crazy Russell scene where he screams, “I am born again!”  Who does not love Russell?  So what do you think is Sookie going to regret giving up her powers?  Is she going to need them and find out what it is like not to have them?  Can Eric save Nora?

Will there be a war between vampires and humans or can Eric stop it.  Will Alcide defeat JD and become the new pack leader?  Hit the comments and let us know what you think?

“Somebody That I use To Know” airs on HBO on July 29th, 2012. Check out the preview video and some pics above of episode 8 and let us know in the comments below what you think!