‘True Blood’ Season 5 Finale ‘Save Yourself’: Will Russell Edgington Destroy all the Fairies? 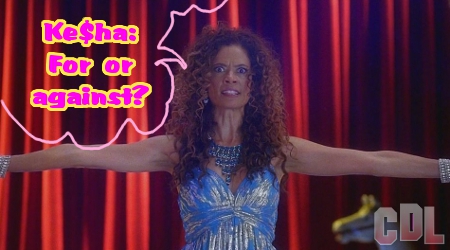 True Blood Season 5 is coming to a close, and all of us here at Celeb Dirty laundry couldn’t be any sadder. The season was jam packed full of crazy, blood sucking action and one of the highlights of the season has been the return of Russell Edgington, the badass vamp who’s on a continual quest to see the sun once again. While it’s true Russell’s one of the baddest baddies in Bon Temps and we would never want to see him wipe out the magical-strip-teasing fairy clan, his motivations are, in a sense, quite beautiful.

Last episode we saw Russell completely take down the Fairy Elder, who was BTW one of my favorite minor characters the show has ever brought in. The Fairy Elder, who was said to be so old and has traveled between so many realms she could no longer think straight or clearly, added some quirk and charm to the episode. Sookie Stackhouse appears before her to get some answers about the vampire out to eat her, but she struggled with getting coherent answers.

“Ke$ha: For or against?” she asked Sookie, who doesn’t seem to be to familiar with our girl Ke$sha. “She doesn’t really sing, does she? She talks. I suppose that makes her some sort of poet. Which is alarming. Her spelling is atrocious!” the Fairy Elder says in response to Sookie’s dumbfoundness. “Boys to Men: For or against? John Mellencamp: For or against?” This playful banter continued for a while until Jason stormed into Fairy Party Central claiming that Russell is alive, well, and out to eat Sookie.

Eventually, the Fairy Elder agreed to help Sookie defeat Russell; however, she failed big time. Like, seriously. SERIOUSLY. When she was dueling Russell, she shot fairy power at him twice, but she missed both times. #LoserFairy. In her first attempt, she unintentionally hit Jason with the fairy power (interested to see what becomes of him next episode). Russell dodged the second fairy power attack, which knocked out Rev. Newlin. Then, Russell drained her completely and, in the process, absorbed some of her fairy power. Crap. Crap. Crap. A vampire hyped up on fairy power? No good. Nope, no good at all.

Now that Russell has a bit of fairy juice in his system, he has an unnatural connection to the rest of the fairy clan. He can see their secret fairy strip club, which, as we know, is magically hidden in a farming field, and he’ll stop at nothing to get to them.

Will the fairies put up a decent fight? Will Russell completely obliterate this magical race? Will Sookie’s own fairy power save the day? Tell us what you think!

It will be interesting to see if they try to wrap up this season by destroying the main villain — as they did with Maryann (the crazy sex-loving Maenad) and Marnie — or if they’ll give us a nasty cliffhanger. Russell Edgington isn’t your run-of-the-mill villain so I’m betting on the fact that they won’t stake him quite yet. They put a lot of effort into his comeback and, depending on whether or not he gets his fill of fairy blood (chances are he will), there’ll be a whole new story line for the show to play with next season: daywalkers. If Russell is successful with his plan, my hunch is he’s going to try to find a way to pass on his newly acquired daywalking abilities to other vampires (perhaps create progeny that are born with innate daywalking abilities).

Make sure to tune watch the finale with us this coming Sunday. We’ll be LIVE blogging the episode, so please come watch with us. If you want some juicy, fangtastic spoilers for the finale click here.