‘True Blood’ Season 5 Finale ‘Save Yourself’: Will Your Favorite Character be Staked? 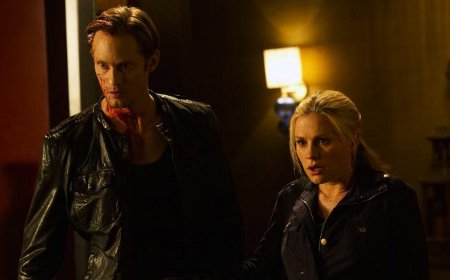 Tomorrow night is the Season 5 finale of True Blood, and we’re wondering who — if anyone — is going to get staked. It’s a tough question to answer because nearly every character is in a sticky situation, one that could very easily result in a vampire explosion, fairy explosion, shapeshifter explosion, or plain ol’ boring human explosion. Regardless, there’s going to be blood, but can we expect anything less from one of our fave paranormal shows?

It would be good for Bon Temps if Russell met the True Death, but we really don’t want to see that happen. He’s just too strong of a character to be killed off again. At least right now. The show went to a lot of trouble to bring him back, so we think he’ll be sticking around for a bit longer. Plus, Russell currently has the upperhand. He’s totally high on magical fairy blood and ready to — unfortunately for Sookie Stackhouse — kick some fairy ass. Now onto the people whose lives who we’re really fearing for . . . .

1. Jason Stackhouse: Jason, who was just trying to be a good cop, accidentally got in the path of the Fairy Elder’s magical-fairy-power-projectile. He was blasted clear across the field and hit a tree. He was knocked out cold. Wonder what his fate will be? Will he be changed at all? Will he somehow come into some fairy powers of his own? I don’t doubt the fact that he’ll wake up . . . he has to because Sookie would be a full on mess if he didn’t.

2. Sookie: Duh. I mean, isn’t she always in danger? At the end of the last episode, Sookie was seeking shelter in the magical fairy strip club BUT, after Russell drained the Fairy Elder, he gained fairy vision and can now see into the club. He knows where Sookie is; he also knows where the fairies are. Will he have a fairy smorgasbord?

3. Sam Merlotte and Luna: Last episode they successfully, with their incredibly bad ass shapeshifting skillz, infiltrated the Vampire Authority HQ in an effort to save Luna’s daughter. They were eventually caught. Luna was thrown in a jail cell. Sam was taken away and delivered to Bill . . . for dinner.

4. Pam: Last episode, Rosalin stormed into Fangtasia to see where Area 5 Sheriff Elijah went. Rosalin admitted that Elijah was one of her progeny and ordered for his murderer to fess up. Pam, protecting Tara, admitted to killing him even though she didn’t. She was taken away by the Authority . . . and we really hope that she won’t be staked.

5. Jessica: Chances are she’ll be fine, but she’s basically being held captive by Bill, who continues to believe he’s the chosen one.

6. Salome vs. Bill: Will they have showdown, an epic battle between Chosen Ones? No doubt. Who will be victorious?

We can’t wait for tomorrow night’s episode.Who do you think will get staked? Don’t forget to tune into watch alongside us as we LIVE blog the episode! If you missed last week’s episode, watch the video below for our top 5 moments or read the full recap here.