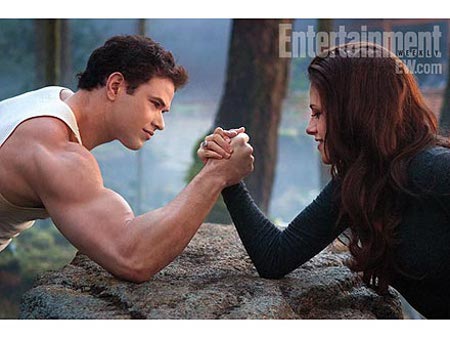 Kristen Stewart gives it her all against Kellan Lutz in this newly released picture depicting the two Twilight co-stars battling it out in a sexy supernatural arm wrestle!

Kristen has played the human klutz Bella Swan in the first three Twilight installments, and in the final film, Breaking Dawn Part 2 she finally gets to channel her vampire strength. In the last film, we watched her give birth to her human-vamp child Renesmee, upon which time Edward turned her into a vampire to ‘save her life’. You with me so far?

So we know that vampires possess super human strength, not to mention the fact that they are exceptionally beautiful. So this means that long gone are Bella’s clumsy tendencies — this girl’s got some power! I remember reading the part in the book where she sits down with Emmet for an arm wrestle to test her abilities, and thank god they kept the scene in the movie.

Taylor Lautner, her co-star who plays the werewolf Jacob, described Kristen as a “super-sexy vampire who’s athletic and graceful”.

She told Entertainment Weekly that she was eager to finally join the vampire clan and take Bella to the next level.

“I knew every single version of vampire, and I took a little bit from everyone.”

Of tackling a mountain lion in one scene, she said, “I ripped that mother to the ground! For the first time I was like, ‘Wow, I’m, like, really playing a vampire now.'”

Ya, so she’s going to be badass — Kellan has nothing on her!