BY Rosie Leblanc on January 16, 2012 | Comments: one comment
Related : Spoiler, Television, Two and a Half Men 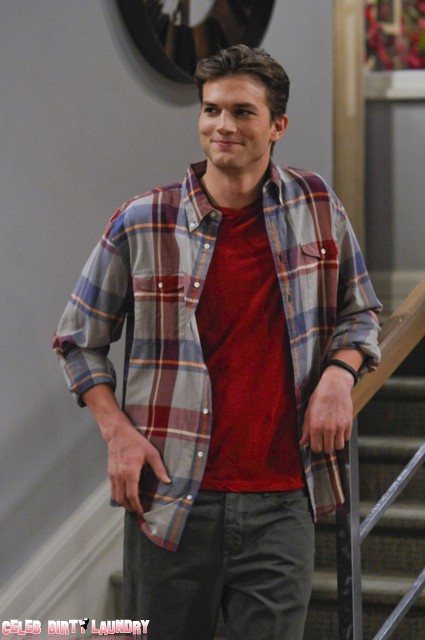 Did you see last week’s episode when Alan set the front of his pants on fire?  If you missed it, you can always read the full OFFICIAL recap HERE. Tonight’s episode has Walden back on top of his companies board after his mother and ex-wife tried to oust him last week.

Official Synopsis: A Possum on Chemo, Alan’s on again, off-again relationship with Lyndsey is back on; Zoey goes to extremes to make Walden get a shave and a hair cut.

Spoiler Alert – , don’t read further if you don’t want to know – In tonight’s episode Zoey tells Walden that she’s not crazy about the ‘Jennifer Aniston’ hairdo, meanwhile Alan loves it, finds him rugged and sexy. Can you believe they are going to focus a whole episode on Ashton Kutcher’s haircut and Berta will be cutting it!  It’s about time Walden changes his look, I’ve personally had enough of the ‘Jesus’ look to last a lifetime, but I don’t know if will carry a whole episode.

Walden’s new look seems to me that Chuck Lorre is trying to make Kutcher look like Sheen, what do you think? Is it just a matter of time before Walden is wearing Charlie’s signature shirts as well?

It will certainly be interesting to see this episode because if Walden is rekindling his relationship with Lyndsey, why is he going so far as to change his look just to please Zoey!  After last week’s episode, I’m left with one question, did Alan require medical help?

Two and a Half Men airs Monday night at 9:00pm on CBS and we will be live blogging it so make sure to come back to this spot!