BY Rosie Leblanc on February 6, 2012 | Comments: one comment
Related : Spoiler, Television, Two and a Half Men 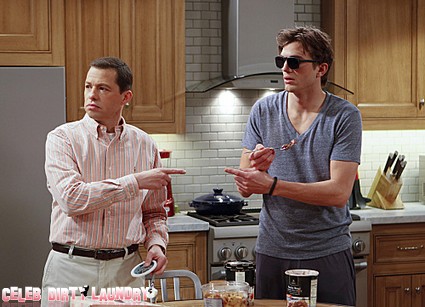 I have to admit that this new season has been as painful to write about as it’s been to witness. But, I’m optimistic going into this week’s episode even though it is again surrounded around Walden’s manhood, although this time it may be a lack of.  If you missed last episode you can read our official recap here!

Official synopsis: The Duchess of Dull-In-Sack: Walden tries to get Zoey to relax by introducing her to Berta’s “enhanced” brownies.

This week Walden is in a love life crisis when he is worried that he and Zoey’s time in the sack might be getting a little boring when Zoe tells him after sex, “that was nice, now let’s do something fun”. Walden confides in Alan – Zoey’s appearing bored in the sack makes him question his performance, or does it? Alan provides comfort to Walden by telling him, “put your pants on so we can’t get back to the family reunion. After all of Walden’s bragging about his manhood and sex life in previous episodes it is really nice to see Zoe put him in his place by acting nonchalant about having sex with him. Will Walden survive this crisis? Or will he run back to his ex, Bridget, the women he married only because she reminded him of his mother, for comfort?

Wait there’s more, not only does Walden have to worry about Zoe’s ‘Que Sera” attitude about their sex life, Zoe’s little girl invades the bedroom and finds Walden pinned underneath the bed.

Now Walden decides to use some of Berta’s famous “enhanced” brownies to get Zoe to relax. Does it work or will it backfire causing Walden to have to find a new significant other?