BY Rosie Leblanc on January 16, 2012 | Comments: Leave Comments
Related : Recap, Television, Two and a Half Men 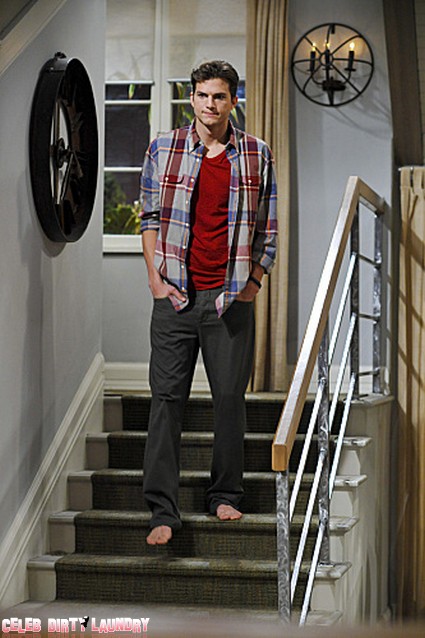 CBS’s Two & A Half Men is back tonight with an all new episode called ‘A Possum on Chemo.’  Have you seen Ashton Kutcher’s new haircut?  He was going with the hippie look for a long time but he shaved and cut it off and I must admit he looks a lot better.  What do you think of the new do??  On last week’s episode episode called ‘Slowly and in a Circular Fashion’ Walden’s ex-wife and his mother tried to wrestle control of his company if you missed the episode you can read our official recap here.

Tonight’s Episode synopsis: Zoey tries to coerce Walden into cutting his hair and shaving. Meanwhile, Alan and Lyndsey rekindle their relationship, on TWO AND A HALF MEN, Monday, Jan. 16 (9:00-9:31 PM, ET/PT) on the CBS Television Network.

So now we know why Ashton cut his hair.  Can you believe they are going to focus a whole episode on Ashton Kutcher’s haircut and Berta will be cutting it!  It’s about time Walden changes his look but it is hard to imagine how Walden getting a haircut can carry the whole show.

Two and a Half Men airs tonight at 9:00pm on CBS and we will be live blogging it so make sure to come back to this spot and refresh often to get up-to-the-minute details!  While you wait for the recap, check out a sneak peek video and some spoilers we posted earlier today!

At dinner, Walden tells Alan that Zoey doesn’t like his beard and Alan says it makes Walden look rugged. When Zoey asks Alan why he doesn’t have a beard, he says he tried it once but looking like “a possum on chemo”. Alan sees one of his old girlfriends, Lindsey, who he thinks is alone, only to find out that she is with a younger guy that has a ferrari.

Meanwhile, Jake is eating chips with his friend who comes up with a supposed million dollar idea, make chips with dip already on them – the two are watching Beavis and Butthead.

Alan gets back home to an overwhelming smell of bug spray, Jake and his friend sprayed it to kill the smell of weed.

Walden and Zoey are making out and she starts spitting out beard hairs. She finally tells Walden the real reason she doesn’t like his look is that she has an important office function and she doesn’t want to being “hipster Jesus” with her.

Walden arrives to pick up Zoey, he didn’t shave or cut his hair and she is furious, she slams the door in his face. Meanwhile, Jake is making out with Lindsey on the couch and she shares with him how difficult it is to date her 25-year old boyfriend, Dillon. The two start making out again and the doorbell rings, it is Zoey. Walden comes down the stairs and he is shaved and got the hair cut. Zoey came over to apologize and then she goes up stairs with Walden to test drive his new look.

Alan is in bed with Lindsey and Zoey comes out of his bathroom, she doesn’t like to use the one in Walden’s room because she doesn’t want him to hear her bathroom noises. Once Zoey is back with Walden their giggling annoys Alan and Lindsey tells him, they don’t have what they have.