Two And A Half Men’s Ashton Kutcher, Jon Cryer Offered New Contracts But No Pay Rise 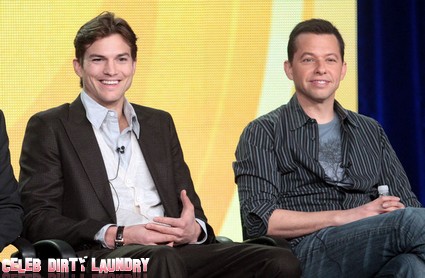 Two And A Half Men should be on our TV screens for at least two more years. That’s the length of new contracts offered to stars Ashton Kutcher and Jon Cryer. But will they sign on for another couple of seasons? The new contract doesn’t come with pay rise.

According to The Hollywood Reporter Ashton – who joined this season after Charlie Sheen‘s exit – makes $700,000 per episode. So if there are 22 eps in a season he pockets more than $15 million. But he wants what his predecessor was making. Charlie was on a million dollars per episode. Even Jon – who’s been on  the show from day one – doesn’t make as much as Ashton does now.

There’s also talk the stars don’t reckon there are two seasons left in the sitcom. They’d like to do one more year – which would be season 10 – and then bow out. But money talks and if pay rises were attached to new contracts Ashton and Jon probably won’t be going anywhere fast.

Negotiations need to progress pretty quickly. The season finale will be taped next week at Warner Bros in Burbank. If the stars aren’t happy and the whole deal falls over the episode will essentially become the show’s swansong. And it will need to be rewritten to reflect that. Or if things are up in the air the episode will have to be written as if the show might not return.

It was once the most popular show on TV. But it’s now a shadow of its former self. You have to ask – is it worth bringing back? Or should we leave it to RIP.