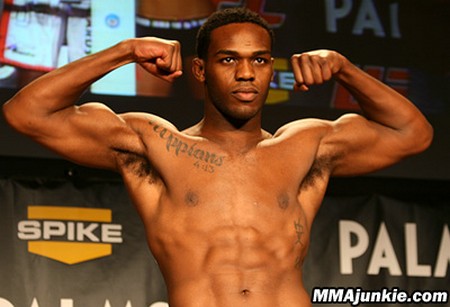 UFC Light Heavyweight champion and titleholder Jon Jones was arrested for DUI early Saturday morning.  Jon ‘Bones’ Jones was so drunk around 5 am that he totaled his Bentley and was arrested by police who arrived at the scene of the crime.

Police say that Jon was involved in the accident near Binghampton, NY and that he was lucky to escape serious injury.  The drunk fighter wrapped his expensive car around a pole – yes, he crashed right into it!

Jon was taken into custody by the County Sheriff and was bailed out by his mother several hours later.  Jon did not drive home.

UFC Light Heavyweight champ Jon “Bones” Jones was arrested early this morning for DUI after he totaled his Bentley in upstate New York … TMZ has learned.

Law enforcement sources tell TMZ … Jones was involved in an accident at around 5:00 AM in Binghamton, NY. We’re told the car — which Jones crashed into a pole — was totaled and cops arrested Jones on the scene for DUI.

According to our sources, Jones was taken into custody by Broome County Sheriff and bailed out a few hours later … by his mom. Jones is from nearby Ithaca.

Here we go again.  MMA and the UFC in particular are a bad joke.  An assortment of drunks, druggies, steroid shooting freaks, and criminals the likes of which only professional boxing equals.  Of course, as we have said before, what can we expect from people who choose to make a life and a living out of beating people up and making them bleed.  What do you think?  Let us know in the comments below.