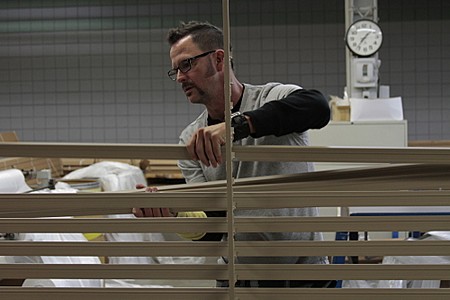 A whole new episode of the two-time Emmy Award-nominated reality series Undercover Boss returns for its tenth episode tonight called “Budget Blinds.”  Stay tuned as we live blog the episode with all the up-to-the-minute details.

On last week’s episode called TaylorMade Golf Company we met Mark King, President and CEO ot TaylorMade Golf, the largest manufacturer of golf equipment and apparel in the world.  Mark was forced to break cover when an employee grows suspicious of her new trainee and the Boss grows concerned with a disjointed structure of command at one of his factories.  If you missed the episode you can read our full recap here!

On tonight’s episode Chad Hallock, CEO and Co-Founder of Budget Blinds, the largest window coverings franchise in North America with more than 800 franchise locations, takes it personal when two separate franchisees criticize his advertising plan, and one employee turns up the heat when she considers inviting the Boss to her hot tub after work.

Budget Blinds’ Madelyn Harris has this to say about Chad being on the show: “Not only is this a great opportunity to help grow our individual franchises, it’s a great opportunity for the company as a whole.  Budget Blinds corporate is expecting to have a spike in customer calls – like other companies featured by the show.  Being on Undercover Boss will give Chad valuable insight into franchisee day to day operations that he is sure to incorporate into all future communications and initiatives.”

The show airs tonight at 8pm on CBS and we will be live blogging all the details. So don’t forget to come back and refresh your screen often for live updates. While you wait for the show – check out the sneak peek video below of tonight’s episode and let us know what you think of the season so far!

RECAP: Chad is trading his luxurious lifestyle for a mohawk and combat boots. Chad was born in Anaheim, California, he is a twin from a single parent home. without a college degree, Chad has been in the blind business since he was 19 years old. He has a son and is married for the second time.

Chad wants to see if the franchisees are optimizing their businesses to make the most money they can. He is posing as an artist who has failed in his own career and is looking for a second chance. This is a little nerve racking for Chad who is not used to being alone but always with his team.

Today Chad is starting in Morris, Illinois and he meets with Keith, a franchisee owner. Keith has been in the business for 10 years and explains to Chad that his family is very important to him. Keith starts talking about head office and the owners, he tells Chad that “Chad” the owner, is really serious. They are on a sales call and Chad finds that Keith is asking too many questions of the potential customers and not offering any suggestions. Chad is being driven nuts, Keith sales are not stellar and it’t clearly because he takes too long on sales calls and doesn’t offer enough suggestions. Chad thinks the franchisee owner needs a little more training, he should know how to design a room and he doesn’t. Keith explains that head office wants you to be more direct with your sales, but he doesn’t agree. Keith goes on to say that “Chad, our CEO” doesn’t take suggestions too well without getting defensive with them and hopes they don’t forget the little guy.

Chad is now in the metropolitan city of Chicago and meeting with Maris, a franchisee owner. They are on an installation call and Chad finds that Maris is just on top of things. Maris doesn’t see Chad as a franchisee owner because he works too slow. On the way back to the shop, Maris shares with Chad that she has two children and one has a problem with his right arm and cannot write, he is only twelve years old and she is having a hard time getting the right medical help for him. They are back at the office, she shares her sales secrets with him, she juices the doormen at condo buildings so they will refer her to the residences. She tells Chad that she finds that corporate should spend more money on the franchisee advertising budget.

Char is in Middleton, Wisconsin at the factory that makes the blinds, he meets with Pam, the Paint Line Technician. Pam suits up Chad with some safety equipment, she goes over to talk to her friend and tells her that Chad has that “famous rock star” look. Pam finds that Chad is really awkward, like a bowl in a china cabinet. Chad finds the job is hard because it is so monotonous. Chad and Pam have time to chat, she tells him that she has been with the company for twenty six years with no employee recognition, no more picnics and they will show you the door if you don’t like it. Chad feels that the moral needs to be boosted again, it needs to be fixed.

Chad meets with an installer, his name is Denis and you name it, this guy doesn’t miss a beat. Denis goes the extra mile, he even dusts the customer’s windows when he is high up on the ladder to install the blinds. Chad and Denis head out to have a beer together, Denis tells him that his child was murdered a few years ago, his name was David. Chad is beside himself with grief for Denis and can’t believe they never found the person that killed his son. His son had five children and it’s important for Denis to keep them close.

Chad meets Pam and thanks her for always thinking about quality control. He tells her that the company is going to bring back the picnics for spring as well they want to give her and her husband a trip to Mexico.

Next he neets with Maris, he tells her that they are going to take $25,000 and put it towards a Chicago regional marketing campaign. Chad also wants to help her with her son Tyler, they are going to give her $30,000 to help pay for whatever her son needs medically.

Next Chad meets with Keith, he tells him that he is right about the national advertising campaign and they are going to help with it. He also tells him that he needs some traing with his sales techniques, so he is going to send Brent to help him. The last thing, the company is going to give Keith 15,000 for each of his two children in a college fund.

The last person, Chad meets with is Denis. He tells him that he enjoyed working with him more than anyone else and wants to fly him out with them for an awards banquet. He also tells him that he is very sorry that he lost his sone and although nothing can bring him back, he wants to help him remodel his house by giving him $40,000 to help with that.

In the weeks since, Pam and her husband had a blast in Mexico. Maris is less stressed not having to worry about medical bills. Keith got himself a financial advisor to help with the children’s education money and looks forward to seeing Brent. Denis is almost finished the renovations and is planning a big party to celebrate his son’s life.