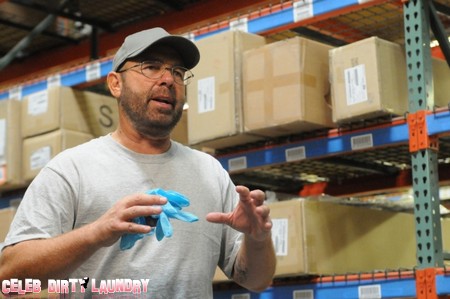 A whole new episode of the two-time Emmy Award-nominated reality series Undercover Boss returns for its eight episode tonight called “Taylormade Golf Company.”  Stay tuned as we live blog the episode with all the up-to-the-minute details.

On last week’s episode called Yankee Candle we met Harlan Kent, President and CEO goes undercover where his customer service skills leave several co-workers questioning his true identity.  If you missed the episode you can read our full recap here!

On tonight’s show Mark King, President and CEO of TaylorMade Golf Company, the largest manufacturer of golf equipment and apparel in the world, is forced to break cover when an employee grows suspicious of her new trainee and the Boss grows concerned with a disjointed structure of command at one of his factories.

RECAP: Mark King overseas the business with 2000 employees, he is a former sales representative and has played golf since he was a little kid. Mark golfs as much as he can and the best part of being a CEO, is you come and go whenever you want. Divorced twice, he has two daughters from his first marriage. Mark is going under cover because sales are down in the industry since the year 2000 and as the CEO he wants to know where he can improve to increase sales. Marl is going undercover as Al Bauer, a golfing enthusiast.

He is in Wesminster, South Carolina to meet with Caley, the Quality Control Auditor in the golf ball manufacturing plant. Caley shows Mark how to inspect every ball, she does 5000 every day. Mark is really slow at the job doing one at a time, Caley tells him to do three at a time to go faster.  They head over to stamping, to check the ball after they are stamped and Mark is still not doing well. Over to paint next and the pressure is on, Mark just can’t keep up.  Mark and Caley have a little time to talk, she tells him that it is really stressful because there are no supervisors, she works all alone in the night shift, she is 21 years old. They are now at final inspection, they have to go through six boxes on the pallet to check for imperfections, if they find more than three they have to reject the pallet. The two are talking again, Caley tells him that she doesn’t have a good relationship with her dad and he wouldn’t walk her down the isle, although she has supportive relatives that have taken care of her. She love her dog, she tells him that she took all her wedding money to buy a dog that she considers her baby.

On to another part of the company, Mark meets with Theresa, the Returns Supervisor. She shows him around and starts with the computer, they have to scan tracking numbers of returned products. Mark is having a tough time using the computer, the scanning is easy. Theresa has been with the company for ten years, she tells him that she has developed how to process returns. Returned shows, if there are defects, they get cut and thrown in the trash, even the apparel. Mark is shocked, these items can still be used and hates that they are getting thrown out. Theresa tells him that she doesn’t like it, but that is what they are supposed to do. Theresa tells Mark she is 53 and single with no children. She goes on to tell him that she is going to Alaska on a singles cruise, this is on her bucket list – she also wants to go to Australia and she has her motorcycle license. Theresa has thought of being a foster parent because she has a three bedroom home, but never did. Mark is having a hard time lying to Theresa, this cover up job is getting to him. Mark can’t do this any more, he tells Theresa the truth about who he is. He goes on to tell her that he had to tell her the truth because she is a spectacular employee.

Mark is in Ohio, he now meets with Jarryd, a Demo Technician. They carry out all the equipment on to the green and while they are walking, Jarryd tells Mark that he wants to play gold professionally one day.  Mark has been doing demo days for 20 years and never seen one as efficiently run as this one. Jarryd shares with Mark that he gets paid for time on the job, but not travelling, he pays for the gas for himself and he bought a bigger vehicle to carry the equipment around in. They take a break and sit down, Jarryd shares with Mark that he loves golf, he was shown to play by his dad and would love to own his own golf course one day. Mark loves that Jarryd has a love for the game just like him.

His final stop is Carlsbad, South Carolina and today he is working on the production floor, he meets with Christian who works in the golf club assembly. Christian is surprised to see Mark on his line, because he is in his 50’s and the oldest person on this line is 25. Christian tells Mark that he never misses a chance to work overtime so he can take care of his family, he dropped out of college when his mother was sick. Christian has a passion for soccer and had a scholarship, but lost everything when his mother got sick because they had no insurance. When Christian and Mark went back to work, a lot of the employees kept staring at Mark, they know who he is – Mark is busted!

Mark’s undercover experience is almost over, he just now needs to meet with his board members and tell them the things they can do to improve the company.

It is time for Mark to meet with the employees, Caley is first and he tells her that he is very impressed with the level of responsibility that she takes on. He has been looking for a dog for her and they are very hard to find, so he is giving her $3,000 to buy one on her own as well as $10,000 towards her dream home.

Next is Jarryd, Mark tells him that they are going to reimburse him for gas moving forward. Mark has done some research on Jarryd and he is a good golfer, they are going to give him $50,000 towards making that dream come true.

Christian really touched Mark, sacrificing his future for his family. He is giving him $10,000 to help with his mother’s medical expenses. He is also giving him $30,000 over two years so he can work part-time and go back to college, as well, they are going to pay for his college.

Theresa is last, Mark tells her that they are going to bring golf to inner-city kids with all the returns. He is also giving her a week off paid vacation and $5,000 to spend on anything she wants. The big surprise, he is sending her to Australia, all expenses paid.

Mark has decided to start a golf program for homeless families, so every one can play the game – he is investing $50,000.

In the weeks since, Caley and her husband are looking for a new home to house their new dog, Jarryd hooked up with his old coach, Christian went back to college to pursue a business degree and Theresa is planning her dream vacation.