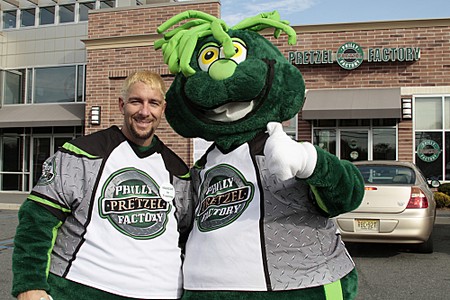 A whole new episode of the two-time Emmy Award-nominated reality series Undercover Boss returns for its eleventh episode tonight called “Philly Pretzel Factory.”  Stay tuned as we live blog the episode with all the up-to-the-minute details.

On last week’s episode called Budget Blinds Chad Hallock, CEO and Co-Founder of Budget Blinds, the largest window coverings franchise in North America with more than 800 franchise locations, took it personal when two separate franchisees criticize his advertising plan, and one employee turned up the heat when she considered inviting the Boss to her hot tub after work.  If you missed the episode you can read our full and detailed recap here.

On tonight’s show Dan DiZio, CEO and Co-Founder of the Philly Pretzel Factory, which sells over 100 million pretzels a year throughout its 120 stores, is forced into action after one franchisee goes rogue, and the Boss is brought to tears when he realizes he let one of his franchise owners down.

Dan spoke about how they had to disguise him for the show: “They bleached my hair white, cut some lines in the side of my hair to make me look younger and hipper, they put some blue contacts in, gave me a retainer, and shaved some diamond-type marks in the back of my head as well.”

RECAP: Dan DiZio overseas 1700 employees in eight states and is looking to be a billion dollar company. Dan lost his father when he was very young, in seventh grade, to lung cancer and misses him every day. Shortly thereafter he helped someone sell pretzels on the streets of Philadelphia, and the rest is history!

Although he is passionate about his company, he doesn’t let it dictate his life, family is first. Dan is marries with two children. He is proud of what he has seen in the company so far, but he really wants to know what is going on in his franchises.

Dan heads to New Jersey, to meet with a franchisee that is not doing too well. He meets with Bill, the owner and they go out for a delivery in Bill’s beat up old car. Bill explains to Dan that it is just he and his wife that run the store.  They are back at the store and Bill tells Dan about his special recipe that he makes, he doesn’t follow the franchise system and Dan is really frustrated. Bill goes on to tell Dan that he has a chance to lose everything he has because he doesn’t make much money, he can’t even fix a window in the front of the store that could cost up to $500.00. Bill convinces Dan to try one of the rolls, then Bill takes a closer look at him and appears to recognize him. Bill goes to get his wife and brings her out, they both think Dan looks like the President of the franchise. Dan finally breaks his cover and tells the two who he is, then he sits down with to speak candidly. Dan tells them that he is upset that they are not operating the franchise properly. Bill’s wife told Dan that they met him before and were looking for help, but he didn’t give it to them. Dan is shocked, he doesn’t remember them coming in to ask for help and is choked up about it. Dan is very glad that he is there now and wants to help keep the doors open. Dan really feels that his mom would be embarrassed of him.

It’s a new day, yesterday was a tough day for Dan and today he is in PA meeting with the Assistant Manager, Marquess. This franchise is nothing like Bills, it is very successful. Dan helps to twist the pretzels and can’t believe how fast the employees are making them compared to him. Dan knows how to make the pretzels, but he is throwing them off on purpose so he can keep his undercover status this time. Marquess tells Dan that he has two daughters that want to be Doctors, just then these two adorable little girls come in. Dan is so inspired, he loves how Dan works hard for his family. Marques tells Dan that he would love to own his own store, but he is presently looking for a new job with more money and health insurance, to which Dan is disappointed.

Dan is now down town Philadelphia at another franchise store to meet with Gino. They go out for a hand delivery in the rain. While walking through the streets, Dan loves Gino’s interaction with people on the street. Gino shares with Dan that he has two jobs, he also does data entry. While walking, Dan is getting soaked and Gino tells him they are not provided with rain coats. They have to push the carts down the steps and Dan is concerned that it puts people’s safety at risk because he can’t see in front of him. They get back to the steps after delivering the pretzels and Dan is shocked that they have to drag the carts up them. Gino tells Dan that he dances in his spare time, he loves it.  He also tells Dan that his grandfather was a huge inspiration to him, he passed away. Gino has been to University, he is making his grandfather proud, but found that he doesn’t like accounting.

A new day and Dan is going to be dressing up as a mascot at a New Jersey store. Dan meets Billy who is going to show him the ropes. Dan is really uncomfortable, he doesn’t like this. Dan is running all over the streets, giving coupons, EMT’s stop and want to take their picture with him, he is really getting into it. Billy tells Dan that he is still in school, he wants to be a cop. Dan is concerned in the costume, it is really hot. Back at the store, Manager, Lisa, tells Dan that he pushed in about 50 people, not as much as Billy though. Billy and Dan sit down to chat, Billy tells him that his father is guilty because Billy pays for his own school. Billy goes on to tell Dan that his mother was in the World Trade Center on 09/11 and things just aren’t the same since. His mother also had an accident and hurt her spine.

Dan is done with his undercover job, he feels like everyone he met is more gutsier that he is and will be changed by this experience forever.

Next is Gino, Dan tells him that they need to protect him and buy a vehicle to deliver to the pretzels to the loading dock. Dan goes on to tell him that he is going to pay his school loans, which are around $20,000.

Dan meets with Bill and apologizes to him. Dan is giving him one month of corporate training to help him with his store. They are also going to work on marketing, by buying him a new delivery truck, also sending Billy and his wife Donna on vacation. Lastly, he is going to pay the rent for the store, for the next year. Bill shares the news with his wife and she is overwhelmed with emotion, this is the miracle they asked for.

The last meeting is with Marquess, Dan tells him that it is because of him that the store is thriving. Dan is putting a college fund together of $2500 each for his two kids. Dan doesn’t want him to leave and will get him medical benefits, he also wants him to be his partner in a store, 50/50. Marquess is overwhelmed, he never had anything like this happen to him before. Dan gets up and gives him a big hug.

Dan brings Marquess to the new building he just bought for the new store that they are going to be partners in. Dan thinks that giving back, would make his dad really proud of him and he feels like he is living his dream.

In the weeks sense, Marquess bought a new car and is looking forward to opening the new store, Bill and Donna got their new deliver truck and business is booming, Gino paid off his school loans and is concentrating on his dancing career, Billy is getting ready to show off his mascot moves for the convention.