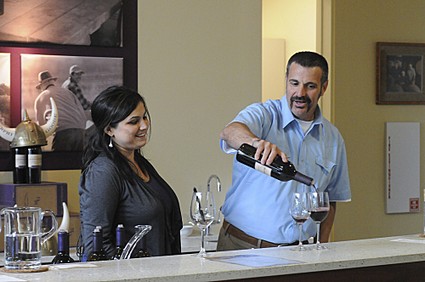 A whole new episode of the two-time Emmy Award-nominated reality series Undercover Boss returns for its third episode tonight  called ‘Kendall-Jackson Wine‘.  On last week’s episode CEO Dina Dwyer-Owens worked undercover at her service-industry company.  She found out that one of her franchises was not following a company policy.  If you missed the episode you can read our recap here!

On tonight’s episode “Kendall-Jackson Wine Estates”– Rick Tigner, President of Kendall- Jackson Wine Estates, causes a shutdown when he struggles to maintain pace on a bottling line, and is shocked by comments made by a delivery driver.  Rick said about what he learned, “I think personally what I learned was a lot of CEO’s and bosses, they have a balance sheet and they see numbers.  What you don’t see on a balance sheet is culture and passion and I will tell you, that is the key to the success in a lot of companies.”

The show airs tonight at 8pm on CBS and we will be live blogging all the details. So don’t forget to come back and refresh your screen often for live updates.  While you wait for the show – check out the sneak peek video below of tonight’s episode and let us know what you think of the season so far!

RECAP: Rick Tigner, President of Kendall- Jackson Wine Estates, who has been with the company for 20 years, wants to go under cover because he really wants to get an understanding of where the moral is. His name will be Jake Williams, a grocery store manager who is part of a reality show about keeping his day job or join the wine business.

He first meets with the production manager, Laura, she teaches him how to go around and count clusters in the field. Rick tries to speak to some other workers, they only speak Spanish. Not having his glasses, Rick is having a hard time count the clusters and he even breaks some of them. Rick finds that it is a very difficult job, he’s sweating and having a hard time after only three rows. Rick is frustrated that he cannot communicate with the other works because they speak Spanish, he tries to make do with his dictionary, but it is tough. Rick asks Laura how she got her training, she tells him that it was all through college and it’s not an easy job because there are not many women working at this type of job.

Rick is now going to be working with one of the truck drivers, Rene, in Napa Valley. They arrive for a delivery and Rick has a hard time hauling a fork lift full of wine cases up the stairs. In the truck, Rene tells Rick that his job has a lot of bull shit, he complains about the customers, people in the office, management. Rene continues to complain and the profanity coming out of him really frustrates Rick. The two break off for lunch and Rene tells him that his goal at the end of the day is just to get that truck empty, no matter what and who cares about customer service. Rene also tells him that one time there was an altercation with a customer and security had to be called. Rick excuses himself and calls in the office, he is so shocked at Rene’s attitude and profanity.

Rick is now in Santa Rosa, California, he is going to work with Marcos, a bottling supervisor. Rick is somewhat of a disaster loading empty bottles on the conveyor belt, Marcos moves him further down the line to where is now packing the boxes. Rick id clearly not made out for any of the jobs on the line, he is way too slow. Marcos moves him again to another job, labelling. Rick is very pleased with Marcos, the two take a break. Marcos tells Rick he is a Mexican DJ outside of the job and he reveals that he has spent 20 years with the company. He also tells Rick that he sometimes feel under-appreciated.

Rick is really missing his wife, he heads back to his hotel and calls her – but she is not feeling well, she is suffering from Parkinson’s disease.

Rick heads to the Murphy Good tasting room for his next part of being under cover. He meets with Savanah, she trains him how to work the wine tasting counter and how to handle customers who walk in. Rick found it very hectic and busy, the business has come a long way since he has been in sales. Rick was really impressed with Savannah, although, she tells him that she doesn’t have benefits or a 401k. She also tells him that she has three children, but is not married. The two find that they have something in common, they both lost parents to drug overdoses.

Rick’s undercover mission has come to end and there is one thing he wants to do right away. Rick meets with Rene, who is shocked when he tells him that he is the President. Rick let’s him have it, tells him that at the end of the day “team Kendall-Jackson” is more important than “Team Rene”. Rick tells Rene that he is suspending him from the truck for 30 days, he will work in the office and see the other side of the business.

Rick invited the other people he met to the company estate, he meets with Marcos, Laura and Savannah – they are all shocked to find out that he is the president of the company. He tells Laura that he wants to put her through the Management training program and they are going to start a new language program, last thing, he is giving her $10,000.00 to help her pay her student loans. Savannah is next, he is donating $10,000.00 to a homeless shelter in her name, he is also offering her a full time job with a $5,000.00 raise and medical benefits which they are covering the costs for. Lastly, he tells her that they suspended 401K, but they are going to restore it because of her. Marcos is last, he is giving him $5,000.00 for DJ equipment, he is also giving him $5,000.00 of gas to get him to work and back. He is also giving him a lifetime achievement award that is worth $10,000.00 and $10,000.00 to go on a paid vacation anywhere in the world.