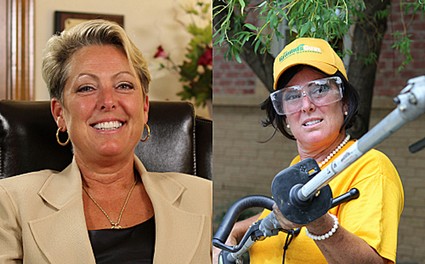 A whole new episode of the reality series “Undercover Boss” returns for a second episode with another high level corporate executive slip anonymously into the rank and file of their own companies to see how it runs.  Like each week they will will leave the comfort of their corner office for an undercover mission to examine the inner workings of their corporation.

On tonight’s episode called “The Dwyer Group” CEO Dina Dwyer-Owens works undercover at her service-industry company.  The boss of Dwyer Group, the parent company of National Home Improvement (Mr. Rooter and other companies), goes under cover when she finds out that one of her franchises is not following a company policy. In the season opener, Dwyer will certainly get her hands dirty when she works as a plumber, hauls water heaters and fixes ovens, amongst other gruelling and dirty jobs.

There are a few close calls tonight where Dwyer-Owens teetered close to revealing her identity. On one occasion, one team member shared his concern about how a franchise owner was compensating him, voicing worries that perhaps he was being exploited. Dwyer-Owens, however, knew the franchisee well, and felt “that was the last thing he would do.” Yikes!

RECAP: Located in Waco, Texas, The Dwyer Group is home to seven franchises. A family business, Mr. Dwyer started his children in the business at a young age, sadly he has now passed but he left his children with the tools to maintain the companies success. Dina has two teenage children at home, her daughter helps her to pack as she heads out undercover with the people who are face to face with the customers. While undercover, Dina is posing as Faith Brown. Her first stop is Mr. Rooter, she visits Bob, the best of the best in the business. Dina meets Wayne, the Master Plumber who is not used to working with women. In the Mr. Rooter van, Wayne tells Dina that plumbers have saved more live than doctors. They arrive at a customer’s door and Faith has the responsibility for putting in a new water heater under Wayne’s direction.

Tonight’s episode: The water heater weighs about 190 pounds and Dina didn’t hesitate to haul it out of the truck and up the driveway. Wayne tells Dina about his family, he has a young boy with autism and a little girl. He goes on to tell her that he is a little sentimental about Mr. Rooter because his father worked there as well, but every time he expects his cheque to be a certain amount, it is always lower and guys are always fighting about their pay cheques, which is tough because they are on commission. Wayne wonders if there is anything shady going on with the company and Dina gets really upset at the word “shady”. Dina pretends to go to the bathroom and calls into the office regarding the commission issue.

Dina’s next stop is to visit the grounds guys, she meets Jake and he gets a little suspicious because she is wearing a pearl bracelet and pearl necklace. Dina gets all set up on a lawn mower, she felt more like she was riding a bucking bronco, but after a few minutes she got the hang of it – so she thought. Jake didn’t find it was good mowing, the lines were all crooked and that is something that he would never accept from his employees. They head on over to tree that needs to be cut down and Dina gets right down on her knees and cuts it down.

A much needed water break gives them time to chat, Jake tells her that he has five brothers and his father committed suicide last year and he is struggling to raise them. His father’s passion was this work, so he is trying to do him proud by doing a good job and keeping up the work.

Dina’s next stop is in Deerport, Texas, Dina meets Brock, the franchise owner. Brock found it hilarious that Dina was wearing lots of makeup and the pearls were out of place. He goes on to tell her that he purchased the business a year ago and still goes out in the field. In Brock’s truck, they both drive over to a customer’s house and Dina notices that there are no markings on his truck to advertise the company. Brock goes on to complain that there are too many steps in servicing the client, fourteen being way too many and he doesn’t follow them.

They arrive at the job and Brock instructs Dina on what to do but she feels really uncomfortable because he is not following the rules. Dina is a little slow at the job and Brock is really frustrated, he is only thinking about going to the next job, he tells her to leave and not clean up.

Dina is now at Mr. Appliance for her next undercover job, she is working with Tanna, a female technician. They get to work on a stove and Tanna is surprised that Dina has pink shiny nails. They start to chat and Tanna tells Dina that she has four kids, she was going stir crazy so she went out to work. They finish out with the job and the customer tells them that the ice is not tasting good in the freezer, can they work on that as well. Tanna says yes and they get to working on the job. Dina finds that Tanna is such a great example that women can work on these jobs as well and make a living for their families. Since Tanna is close to home, she tells Dina she sometimes looks in on her kids and would it be ok if they did now.
Dina meets the whole family, the kids are all there and Tanna’s husband who is a firefighter. Dina is really impressed with Tanna and her family, she calls them the model American family.

The employees are all invited to help decide if Faith decide if she should keep her day job. Dina tells Brock that he has really done well with the success of his franchise, but he has not done well with following the 14 steps to ensure that the customer is happy. She gives him a gift certificate to get a sun shade with the company name on it.

Dina tells Jake that she really appreciated that he shared his concerns with her and assures him that he is on it. Dina offers to help him to buy his new home, she is going to give him $20,000.00 for a down payment, he is completely overwhelmed and doesn’t even know how to thank her.
Dina tells Jacob that he is an awesome young man and she was really impressed that he is following his father’s passion. She goes on to tell him that the company is going to give him a franchise and a new truck to help him out and make his life easier.

Dina tells Tanna that she is what her father would have looked for in one of his technicians and wants her to share what she does with other women. She is also giving her $10,000.00 to start a college fund for each one of her children and another $25,000.00 cash award so she can spend more time with her children.

Dina is overwhelmed with her week and hopes that her father is proud of the work she is doing.

That is a wrap – let us know what you thought about the episode.  Sound out in the comments below!