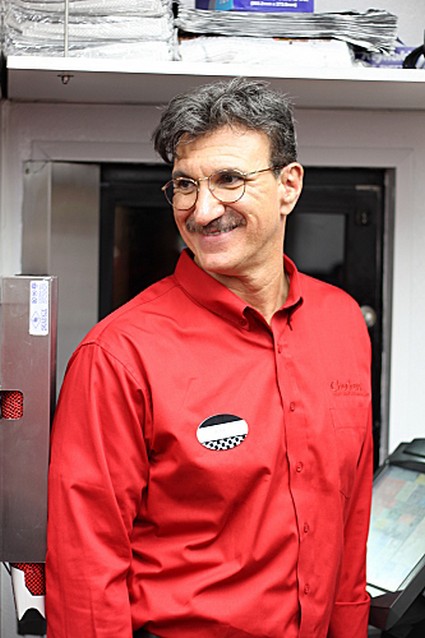 A whole new episode of the two-time Emmy Award-nominated reality series Undercover Boss returns for its forth episode tonight called “Checkers & Rally’s.”   Stay tuned as we live blog the episode with all the up-to-the-minute details.  On last week’s episode celled “Kendall-Jackson Wine Estates”– Rick Tigner, President of Kendall- Jackson Wine Estates, causes a shutdown when he struggles to maintain pace on a bottling line, and is shocked by comments made by a delivery driver.   If you missed the episode you can read our official recap here!

On tonight’s show Rick Silva, President and CEO of Checkers & Rally’s, one of the nation’s largest fast food chains, serving more than two million hamburgers a week, travels to the front lines of his industry, where he’s forced to make a drastic decision regarding one of his restaurants.

The show airs tonight at 8pm on CBS and we will be live blogging all the details. So don’t forget to come back and refresh your screen often for live updates. While you wait for the show – check out the sneak peek video HERE tonight’s episode and let us know what you think of the season so far!

RECAP: President and Ceo of Checker’s & Rally’s will be working on the front lines and first time ever, a boss is going to be forced to do something drastic. Overseeing 20,000 employees is Rick Silva. Before coming on board, he worked for Burger King. He loves the business he is in and he hates to lose. He originally comes from Cuba and anything less than right, is a failure. He was bullied as a child, but stood up for himself. His family started a pharmacy and that is where he got his love of business. He is married for 20 years and has two children.

There are 800 restaurants today and would like to expand to 1000. He will be posing as Alex Garcia and he is a contestant on the show “Second Chances”.

He first meets Todd to get trained on the grill and the fry station.  Todd confesses that he has trained him self, he tells Rick that he always wanted to be a chef and works to support his mother. While working on the fry station, Todd was not using the equipment properly and the general manager kept barking orders, he went as far as telling Todd that he was going to take him outside and beat him up.

Rick is upset that Todd is taking crap from the manager and Todd agrees that it makes him feel like crap. Rick wants him to confront the manager and he breaks down because he is afraid to say something cause he will lose his job and not be able to support his mother.

Rick calls out the manager, Stevens and asks him why he is so disrespectful. He tells Rick that he has to speak to “them” like that because they won’t listen to him. Rick has had enough, he tells the manager that he is the CEO of the company and he is shutting the restaurant down.

Rick is so disappointed; he returns to the restaurant and has the manager tell everyone that the restaurant is closing down. Rick takes everyone outside and he tells them the truth, the employees are worried that they are losing their jobs. He goes on to tell them that it is his fault that they didn’t get trained, he puts a call into his head office to get them trained.

Rick is now off to another franchise, he meets with Joyce. She tells him from the start that she sells hospitality, not burgers and fries. After a few minutes she tells Rick to fly solo at the window.  Joyce watches Rick, she finds that he is as stiff as a milkshake. On to his next task, now it’s the drive-thru window and he is having a hard time because the equipment is so old that he can’t hear them.

Time for a break, Rick heads outside with Joyce for a burger. He asks her questions about what she would do if it were her restaurant.  She gives him some ideas about changes they can make with the types of food and some marketing ideas but she tells him that nobody will listen to her. She tells him that she had a bad family life and the last thing she had was free coupon for a meal at Checkers that lasted for two days and that is why she is so grateful. Her daddy always had an expression, “God never gives you more than you can handle”, she thinks he thought she could handle a lot because she struggles every day.

Rick is now at a new prototype Checkers restaurant, he meets with Johanna. She shows him how to make a classic burger. After making one himself, he finds that Johanna has high expectations. His next task is a chilly dog without cheese, then a sandwich and he is having a hard time, Johanna is calling him a turtle. Rick stands back and watches, he can’t believe how fast Johanna serves. Rick loves the new prototype, he finds it really helps the staff.

Rick asks her if she was a manager what would she do, she said she would tell people that she appreciates people and she would give people a raise, after seven years she makes $8 dollars an hour.

Rick has asked people he worked this week to meet him at the Checkers in Flint, Michigan. He sits with Johanna first and tells her how amazing she is. He tells her that he is going to change company policy, when managers get incentives, the team members will also get in incentives. He is also surprising her that he is going to mentor her to be a manager, give her a 25% promotion and $20,000.00 to buy a new car to get to work and back. She gets up and grabs him for a big hug.

He meets with Joyce next and tells her that her passion is amazing. He is going to change the speaker system in the restaurant and he is going to create a general managers council to share ideas and Joyce will be the first member of the council. Rick wants to give something back to her, he wants to give her $10,000.00 because she has done so much for them. He is also giving her an additional $10,000.00 to do something for herself and she tells him that she will buy an urn for her brother because she couldn’t afford one.

Todd is last, Rick tells him that the thought of someone treating him with disrespect really makes him mad. Stevens has been re-trained and everyone else in that restaurant will be re-trained. Rick wants to put Todd’s dream back on track, they are going to pay for his schooling so he can get his culinary degree, also, they are going to give him $15,000.00 to provide some relief for him and his family. Todd is so overwhelmed, he grabs Rick as well for a huge hug.

Rick leaves this week having learned a lot, Johanna bought herself a new car, Todd actually got a new manager and Joyce can’t wait to be the first member of the new manager’s council.