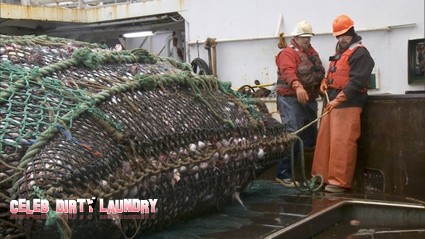 A whole new episode of the two-time Emmy Award-nominated reality series Undercover Boss returns for its fifth episode tonight called “American Seafoods.”  Stay tuned as we live blog the episode with all the up-to-the-minute details. On last week’s episode celled “Checkers & Rally’s”  Rick Silva, President and CEO of Checkers & Rally’s, one of the nation’s largest fast food chains, serving more than two million hamburgers a week, travels to the front lines of his industry, where he’s forced to make a drastic decision regarding one of his restaurants.  If you missed the episode you can read our official recap here!

On tonight’s show Bernt Bodal, the CEO of American Seafoods must sink or swim when he tackles the dangerous work of a deckhand on a fishing vessel off the coast of Alaska, among other jobs  Bernt Bodal wants to go undercover to find ways to increase efficiency and make the company more profitable. He wants American Seafoods to continue to grow and hopes his years of experience on fishing boats will help him spot ways to make improvements.

Bernt Bodal said about the experience: “I haven’t done this job in 26 years and it may be harder than I remember.” LOL from the video I think his boss agrees with him.

The show airs tonight at 8pm on CBS and we will be live blogging all the details. So don’t forget to come back and refresh your screen often for live updates. While you wait for the show – check out the sneak peek video BELOW of tonight’s episode and let us know what you think of the season so far!

RECAP: With more than 15000 employees in the USA, Berndt Bodal is at the helm running the company. He was born in Norway and has the equivalent of a high school diploma. He started his way in the fishing industry for 13 years as a deck hand. He’s a fisherman first, that became a CEO and American Seafood is one of the largest fishing companies in the world. He has a love of falling and music as he plays the guitar. He is divorced with a daughter that is 30. The last time he was on a boat was in 1989. His goal is to make the company even bigger and that is why he is going undercover.

He is in New Bedford, Massachusetts to meet with the Maintenance Manager, John. His fist job is to go in the pit, it is the dirtiest job. He is dressed in an orange suit and when they lift him into the whole, he starts to freak out because the water is boiling. They get him out and John thinks he was over exaggerating. Berndt moves on to the next job, cutting wires and after some training he sucks at it. John reveals that like Berndt, he is also a foreigner and he tells him that they have to work twice as hard as anyone else because of this. John moves Berndt on to welding, but he doesn’t do that right either and takes him into the office to basically tell him that he is not right for the job and should leave. Berndt feels that John’s standards are very high and he lacks some patience with his training.

Berndt moves on to a ship, he meets the captain, who knows who he is. They agree that he should either be on deck or in his state room to avoid being recognized as he has spent 30 years in Alaska.

Today they are fishing for pollock and Billy, who has been doing this for 22 years, is showing him the ropes. Berndt is having a hard time, it is really physical but Billy thinks it is not the physical part that is important, it is the technique and Berndt doesn’t have it. The biggest surprise for Berndt, was to realize how physically hard the job was. Billy thinks if Berndt wanted to stay on the team he would have to see a lot more initiative from him. Billy and Berndt share that both are divorced. Berndt tells him the worst part about being a fisherman is that he is away from his family for long periods, it would be nice if they had computers to communicate with their families when they are at sea.

Berndt is now at the fish meal side of the company. Fishmeal is the scraps of fish, Rafal the Foreman shows Berndt the ropes. Berndt’s first tax is pulling the guts out of the blade and the stench is really nasty, it’s grossing him out. Next, he is filling up bags, they have to be 35.2 kilos and after he is to carry and stack the bags, it’s not the easiest job. Rafal shares with Berndt that he is also an immigrant, but he lives in the USA without his wife and children. He also complains of no communication, also, he is not allowed to leave the job even to go to the bathroom, without someone relieving him because they equipment could break down.

The last stop for Berndt is the Surimi plant, he works with Susanna on an assembly line, she tells him that he needs to work fast. After a few attempts at filling bags, Susanna has to take over because he is going to slow and slows down the line. They take a break and she tells him that is very hard to be promoted, that is why she works so hard. She is originally from American Samoa and since losing her mom, she hasn’t been close to her family. She works on the sea so she doesn’t close to anyone again, because she doesn’t want to feel pain about losing anyone else.

Berndt finds that the main reason they have success in their company is because of the people at sea and he cares about their well being.

He is about to reveal his true identity to all the employees. John is not happy about, he doesn’t like being tricked and made a fool of. He claims that he had a feeling by the look of Berndt’s hands. Berndt explains that he was not trying to make a fool of him, he just wanted to help improve the company. He is going to raise his pay by $10,000.00 and change his title to Director of Maintenance because he is doing such a good job. He is also going to give him $10,000.00 anmd fly him to see his family.

Next he sits with Billy, he tells him that he is going to get internet access on all his vessels for all the crew to communicate with his family. He is also giving him $20,000.00 to help him buy his mom’s house, which is his dream. Also, he is giving $10,000.00 to help with his mom’s Multiple Sclerosis.

Berndt tells Susanna that he is extremely impressed with her skills, he would like to give her a ticket and $5,000.00 to visit her family. One more thing, he is giving her $20,000.00 to help her and her family.

That’s is it for tonight, this was a great episode. It was nice to see that Billy took some time off work to spend with his mother, Susanna reconnected with her family, John is enjoying his new title and Rafal is working on bringing his family to the USA.