What Went Wrong Between Johnny Depp And Vanessa Paradis 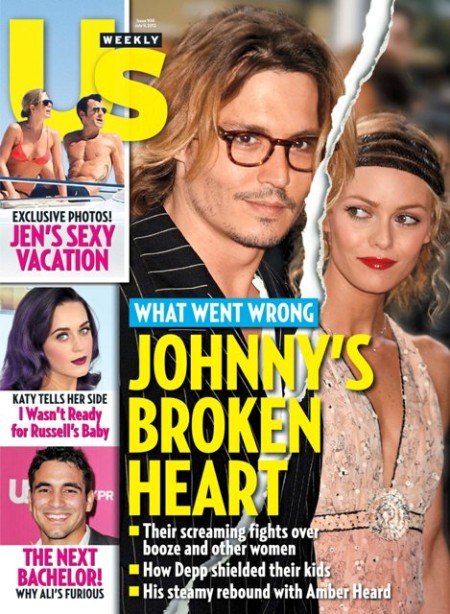 Us Weekly’s cover headline is the story everyone’s talking about and the magazine takes us in Johnny Depp and Vanessa Paradis’ split telling us what really went wrong in their relationship.

Although many accounts have Johnny cheating on Vanessa with his Rum Diary co-star Amber Heard, the magazine  says the relationship was over far before Johnny started fooling around on his movie sets. He even had to shield his kids from the epic fights that went on in their household.

Also on the front page is Jennifer Aniston’s bikini body sunbathing next to boyfriend, and rumored fiance, Justin Theroux during their “sexy vacation”. The couple spent two weeks in Europe where some sources speculate Justin finally proposed to Jen. She was sporting an eyebrow raising rock on her right hand when she returned to the states happy and tanned. Do you think this couple will be able to make it last long enough to walk down the alter or is Jen just trying to beat Brad Pitt and Angelina Jolie to the punch?

And Katy Perry’s finally opening up about her divorce from British comedian, Russell Brand. The pop star has a new documentary coming out called “Part of Me” and reveals to Us that she wasn’t ready to settle down and have Russell’s babies. We’ve heard in the past that Russell was ready to leave his rock and roll lifestyle behind when he married Katy but soon grew disenchanted when she preferred partying with bestie, Rihanna. I’m interested in hearing what she has to say. I thought that couple was adorable and was sad to see them fall apart so soon after saying their vows.

Us Weekly is giving us plenty to chew on this week. Go out and read up and tell us what you think! I’m anxious to hear Depp’s side of the split story. How about you?