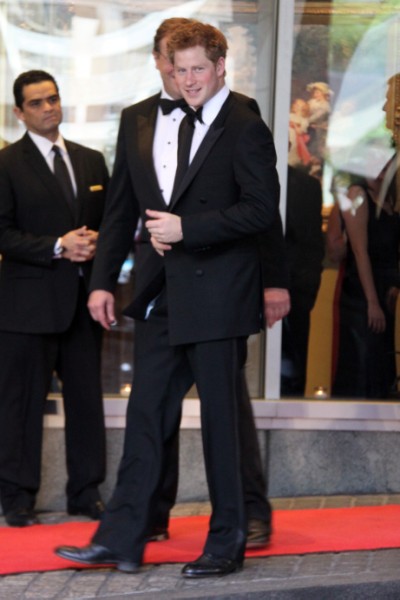 Jamaican sprinter Usain Bolt is asking Prince Harry for a rematch but it has nothing to do with breaking a sweat or who gets to the the finish line first. No, Usain and Prince Harry are going to take their friendly competition to the bar, a place where Harry is King; where second place and second-in-line to the throne is forgotten, a place where Harry can hold his own even against the fastest man in the world.

If Usain wins the gold medal in the 100 meters, he told The Sun he plans on inviting Harry over to his place for some good old celebratory drinking. “Harry is fantastic,” he said. “I will invite him to my Olympic after party.”

The two struck up a friendship when Harry raced Bolt this summer. Harry traveled to Jamaica on behalf of the Queen for her Diamond Jubilee tour and visited Bolt at his training track in Kingston. Harry beat Bolt in their 100 meter race, but he did cheat massively to do so. Apparently there were no hard feelings from the Olympic medalist. “Harry loves to party and Usain’s partial to throwing a shape or two,” a source told The Sun. “Usain is a huge fan of the monarchy and has extended his invite to Prince William and Kate Middleton to party with him. But there’s only one provision — he wins the 100 metres, so it will be a celebration party.”

I’m sure Harry has no problem with that stipulation. He’ll be partying regardless but it’s a win/win situation if Usain brings home the gold!