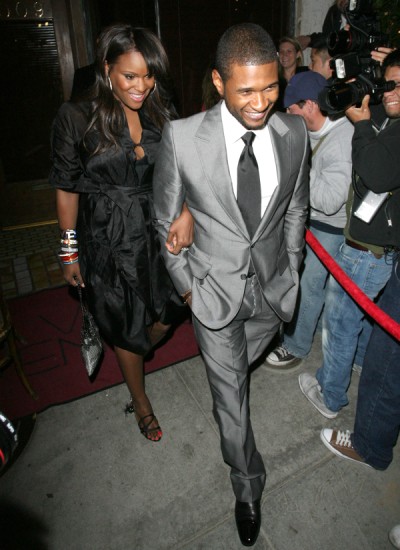 Usher’s child custody trial is taking a turn for the truly heinous with new allegations that Usher cheated on his then wife, Tameka Foster, with a bridesmaid from their wedding!

The National Enquirer reports Usher, under cross examination, was asked by Foster’s attorney if one of her many nannies left their employment because she caught him sleeping  with Maya Fox Davis, a member of the couple’s wedding party.

Usher has already broken down sobbing on the stand once before when Foster’s lawyer suggested that the Confessions singer cared more about partying than his own children. Usher has two boys with Foster, Usher and Naviyd Ely. Usher confessed on the stand to smoking pot in the past but he denied taking drugs in front of his children.

These dirty back and forths have been going on forever. But it wasn’t Usher only on the defense. He told the court that Foster once flew off the handle and threw her food at him in a rage, spat on his girlfriend and screamed, “I’m gonna kick your ass. Bitch, get out of the car.” Geez, where were the kids on that one?

I bet Usher’s mom’s shaking her head to the tune of “I told you so”. She told her son not to marry that woman but he did anyway in a private ceremony in 2007. They divorced in 2009. No wonder Foster was so cranky, she was pregnant the whole time they were married!

Who to side with on this one? I’m not sure. I bet Usher can be a prima donna but if your mama tells you not to marry someone then the mama is usually right!