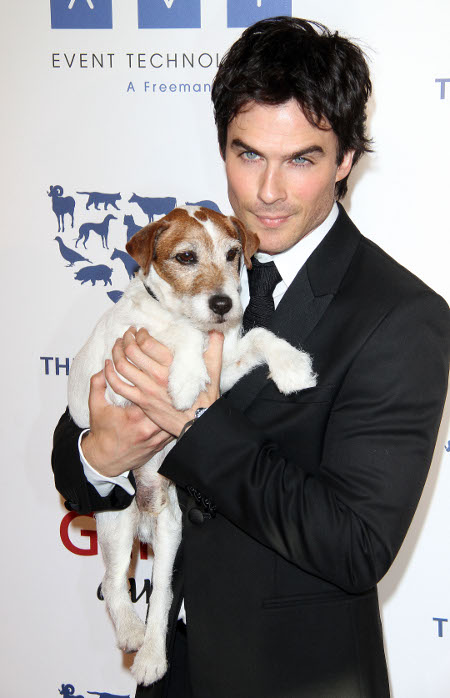 Given my choice between Damon and Stefan on the CW’s hit show The Vampire Diaries, well, there is no choice. It will always be Damon, especially after I learned that he plans on saving the world with his Ian Somerhalder Foundation, which focuses on clean energy, habitat restoration, and rescuing animals from negligent homes and cruel laboratories. Ian is currently dating costar Nina Dobrev and he’s, obviously, a huge animal lover.

He previously talked about his three rescue cats, “one is a feral cat from Hawaii who grew up in the jungle, another one is a rescue from a dungeon in New York, and the other one’s from Canada.” There is something so damn sexy about a man with a rescue pet!

His eyes, his hair, every scene of him getting into or out of the shower . . . let’s just say he’s a terrific actor in a perfect part. And he seems even more perfect in real life. Ian is turning up the heat and taking his passion for rescuing a step farther! He’s recently been tweeting followers to support a local county’s decision to rezone a plot of land purchased so it can be made into an animal sanctuary.

Ian is going to be in Lafayette, Louisianna on September 22nd for a Strut Your Mutt fundraiser, which donates 100% of the profits to help animals. I can’t wait to see pictures of Ian surrounded by puppies. What combination could be better? He’s the sexiest guy on TV and won’t judge you for having seven cats and lots of knitting. Are you totally smitten by Ian or do you prefer Stefan actor Paul Wesley?

Make sure to check out all of our updates on Vampire Diaries season 4 before it airs next month!