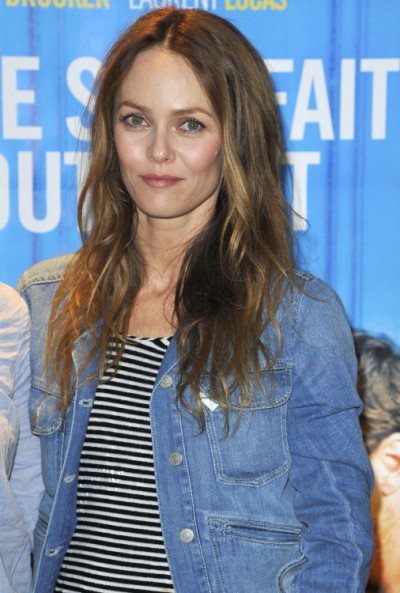 Vanessa Paradis has been tight-lipped regarding her split from partner of 14 years, Johnny Depp, but the model/actress opened up to Harper’s Bazaar magazine about love and loss and seemed to finally make a statement without making much of a statement at all.

In the upcoming September issue for the magazine she said, “Love is the strongest and most fragile thing we have in life. Nothing is ever for sure, but when something in love doesn’t work from the beginning, it’s never going to work. Don’t push it.”

Page Six reports the interview was given just two days before the couple went public with their separation in May. You can imagine how raw and unhinged she must have felt at that time but her words are calm, focused and quintessentially Vanessa. She’s basically saying you can lead a horse to water but you can’t make him drink. Or maybe the animal should be an ass in this circumstance? Regardless, if the relationship isn’t working then it just isn’t working. I’m sure they tried for the kids, but when that doesn’t work, you just have to move on.

What’s confusing to me is the “when something in love doesn’t work from the beginning” part. What do you think that means? Is she saying they had problems from the early start? True, she doesn’t even have to be talking about Depp here. This quote could be totally out of context. But we’re gossipers people! So let’s assume it is in reference to Depp. Do you think she allowed him an open relationship because he couldn’t stay monogamous? I wouldn’t put it past the couple. They seem like they would be in to that. So is she saying he couldn’t stay faithful or give her everything she needed from the beginning? It’s easy to let that stuff slide when you’re young and in love and everything is perfect and Johnny’s teeth are still white and he hasn’t taken to ripping off Keith Richards’ look yet and wrapping himself up in enough chains and scarves to be confused for a waiter at Medieval Times. You can overlook that stuff. But when you mature it gets… annoying… it gets old… fast.

Do you get the feeling that Johnny might have done the initial dumping but, after time to reflect, Vanessa is relieved. There’s the initial “oh my God, what am I going to do or be without him!” phase, but after that, there could have been a giant sigh of relief. Life without Johnny Depp could be calmer. There’s less travel, less hiding, less ego to stroke. Less could really be more for Vanessa at this point in her life.

What do you make of Vanessa’s comments? First off, do you think they’re even about Johnny or could they just be general? And can you believe that Vanessa could be happier without all of Johnny’s baggage?